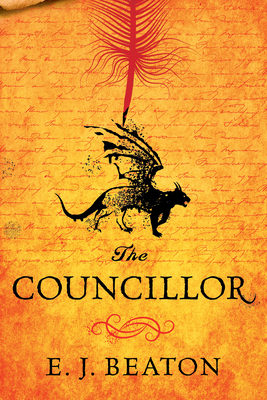 Oh, Lysande, my love! If you are interested in getting to know a bisexual bookworm who is struggling with a drug addiction and can't stop thinking about choking a man who wears a living snake as jewelry, this might be the book for you. This story is full of political intrigue, scheming, examinations of class and privilege, beautiful prose, and just a touch of spiciness. Keep an eye out for Book 2 in 2023!

This political fantasy follows a scholar's quest to choose the next ruler of her nation amidst lies, conspiracy, and assassination

When the death of Iron Queen Sarelin Brey fractures the realm of Elira, Lysande Prior, the palace scholar and the queen’s closest friend, is appointed Councillor. Publically, Lysande must choose the next monarch from amongst the city-rulers vying for the throne. Privately, she seeks to discover which ruler murdered the queen, suspecting the use of magic.

Resourceful, analytical, and quiet, Lysande appears to embody the motto she was raised with: everything in its place. Yet while she hides her drug addiction from her new associates, she cannot hide her growing interest in power. She becomes locked in a game of strategy with the city-rulers – especially the erudite prince Luca Fontaine, who seems to shift between ally and rival.

Further from home, an old enemy is stirring: the magic-wielding White Queen is on the move again, and her alliance with a traitor among the royal milieu poses a danger not just to the peace of the realm, but to the survival of everything that Lysande cares about.

In a world where the low-born keep their heads down, Lysande must learn to fight an enemy who wears many guises… even as she wages her own battle between ambition and restraint.

E. J. Beaton is the author of the fantasy novel The Councillor, out now from DAW/Penguin. She has been nominated for a Pushcart Prize for Poetry. Her previous work includes a poetry collection, and she has been shortlisted for several Australian poetry prizes. She studied literature and writing at university, completing a PhD in English (Creative Writing). She lives in Melbourne, Australia.

Praise for The Councillor

“The Councillor is, in a word, sumptuous. E.J. Beaton’s debut is an expertly crafted story of cut-throat politics, courtly intrigue, addiction, sex, and murder, gilded by some of the most eloquent writing I’ve read in a long while.” —Nicholas Eames, David Gemmell Morningstar Award-winning author of Kings of the Wyld

“The Councillor is a wonderfully assured debut. A smartly-crafted tale of Machiavellian politics, privilege and power, driven by a fantastically nuanced, flawed protagonist and wrapped in sharp, lyrical prose. There’s a lot to love about The Councillor.” —John Gwynne, author of the Of Blood and Bone series

“A tense intrigue of unknown loyalties, political machinations, and secret magic, The Councillor explores ambition, addiction, and the consequences of power. A powerful and intelligent debut from a writer to watch.” —Sam Hawke, author of City of Lies

“Vivid, intelligent, and intense, The Councillor is a story that begs to be consumed. Beaton skillfully layers poetic prose over intricate political machinations, elemental magic, and the strengths and foibles of the human heart.”—Andrea Stewart, author of The Bone Shard Daughter

“E.J. Beaton brings a poet’s eye to politics. Her deft language lays bare the exquisite intimacies of human connection, from the brutal—yet seductive—exercise of power over another, to the moments of tenderness and vulnerability between lovers. An intelligent fantasy of the highest calibre.” —Shelley Parker-Chan, author of She Who Became the Sun

“A sharp and insightful look at power and privilege in a magical world, and what happens when people who’ve historically had neither find themselves in possession of both.” —Anna Stephens, author of the Godblind trilogy

“A gripping tale of intrigue and politics and power, set in a beautifully-drawn world of shifting alliances and morally grey characters. Intelligent, nuanced, and compelling.” —H. G. Parry, author of The Unlikely Escape of Uriah Heep

“The Councillor is elegant, intricate, and utterly engaging! A beautifully written and intelligent debut novel.” —Rowenna Miller, author of the Unraveled Kingdom series

“Sharp and scintillating, The Councillor is high-intrigue fantasy with complex politics, fascinating characters, and gorgeous prose. Beaton has crafted an intricate story and executed it with the elegance of a well-placed blade.” —Cass Morris, author of Give Way to Night

"Emulating Lysande’s approach as a quiet, analytical woman, Beaton’s novel begins by prodding at these newcomers, then thunders to a breathless conclusion as all the strands in this shrewd plot finally come together. A clever start to what’s sure to be an exciting duology." —ALA Booklist

"The Councillor is an exceptional book.... The world and culture depicted by Beaton is breathtaking as it drew me in and I never wanted to leave." —The Nerd Daily