Throne of the Crescent Moon (Hardcover) 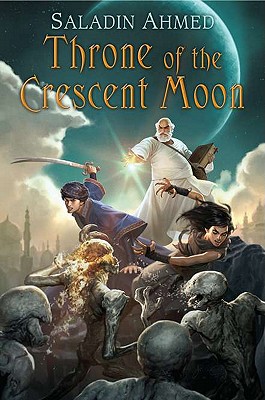 By Saladin Ahmed
$24.95
Unavailable at this time.

From Saladin Ahmed, finalist for the Nebula and Campbell Awards, comes one of the year's most anticipated fantasy debuts: THRONE OF THE CRESCENT MOON, a fantasy adventure with all the magic of The Arabian Nights.

The Crescent Moon Kingdoms, home to djenn and ghuls, holy warriors and heretics, are at the boiling point of a power struggle between the iron- fisted Khalif and the mysterious master thief known as the Falcon Prince. In the midst of this brewing rebellion a series of brutal supernatural murders strikes at the heart of the Kingdoms. It is up to a handful of heroes to learn the truth behind these killings.

Doctor Adoulla Makhslood, "the last real ghul hunter in the great city of Dhamsawaat," just wants a quiet cup of tea. Three score and more years old, he has grown weary of hunting monsters and saving lives, and is more than ready to retire from his dangerous and demanding vocation. But when an old flame's family is murdered, Adoulla is drawn back to the hunter's path.

Raseed bas Raseed, Adoulla's young assistant, is a hidebound holy warrior whose prowess is matched only by his piety. But even as Raseed's sword is tested by ghuls and manjackals, his soul is tested when he and Adoulla cross paths with the tribeswoman Zamia.

Zamia Badawi, Protector of the Band, has been gifted with the near- mythical power of the lion-shape, but shunned by her people for daring to take up a man's title. She lives only to avenge her father's death. Until she learns that Adoulla and his allies also hunt her father's killer. Until she meets Raseed.

When they learn that the murders and the Falcon Prince's brewing revolution are connected, the companions must race against time-and struggle against their own misgivings-to save the life of a vicious despot. In so doing they discover a plot for the Throne of the Crescent Moon that threatens to turn Dhamsawaat, and the world itself, into a blood-soaked ruin.

Saladin Ahmed was born in Detroit and raised in a working-class, Arab American enclave in Dearborn, MI. His short stories have been nominated for the Nebula and Campbell awards, and have appeared in Year's Best Fantasy and numerous other magazines, anthologies, and podcasrs, as well as being translated into five foreign languages. THRONE OF THE CRESCENT MOON is his first novel. Saladin lives near Detroit with his wife and twin children. He can be found at saladinahmed.com.

“Throne of the Crescent Moon is a delight in every imaginable way.”
-The Magazine of Fantasy & Science Fiction

"Readers yearning for the adventures of Fafhrd and the Gray Mouser will delight in the arrival of Adoulla and Raseed. In addition to these two marvelous characters, Saladin Ahmed has given us the wonderful, colorful city of Dhamsawaat, ghuls and demons and manjackals, and the ferocious tribeswoman Zamia, who gives new meaning to the words 'wild girl.'"
-Walter Jon Williams, Nebula award-winning author of DEEP STATE

"This promising debut offers a glimpse of a dusty and wonderful fantasy city through the eyes of three engaging, unconventional protagonists."
-Elizabeth Bear, Hugo award-winning author of GRAIL

"Ahmed is a master storyteller in the grand epic tradition. Swashbuckling adventure, awesome mystery, a bit of horror, and all of it written beautifully. A real treat!"
-N. K. Jemisin, Locus award-winning author of THE HUNDRED THOUSAND KINGDOMS

"A genuinely brisk, bold, and colorful diversion.... Flashing swords, leaping bandits, holy magic, bloodthirsty monsters, and sumptuous cuisine... what more do you want me to do, draw you a map? Read this thing."
-Scott Lynch, Sydney J. Bounds award-winning author of THE LIES OF LOCKE LAMORA