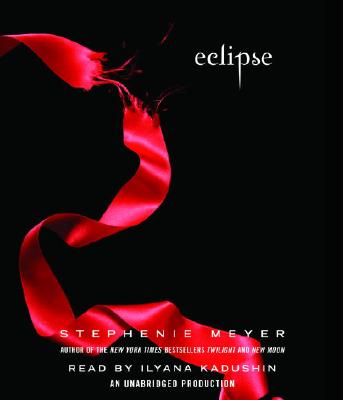 By Stephenie Meyer, Ilyana Kadushin (Read by)
$57.00
Unavailable at this time.

This is book number 3 in the Twilight Saga series.

Edward’s soft voice came from behind me.

I turned to see him spring lightly up the porch steps, his hair windblown from running. He pulled me into his arms at once, just like he had in the parking lot, and kissed me again. This kiss frightened me. There was too much tension, too strong an edge to the way his lips crushed mine–like he was afraid we had only so much time left to us.

As Seattle is ravaged by a string of mysterious killings and a malicious vampire continues her quest for revenge, Bella once again finds herself surrounded by danger. In the midst of it all, she is forced to choose between her love for Edward and her friendship with Jacob–knowing that her decision has the potential to ignite the ageless struggle between vampire and werewolf. With her graduation quickly approaching, Bella has one more decision to make: life or death. But which is which?

Stephenie Meyer graduated from Brigham Young University with a degree in English literature, and she lives with her husband and three young sons in Arizona. After the publication of her debut novel, Twilight, booksellers chose her as one of the "most promising new authors of 2005". (Publishers Weekly.) Look for Twilight, New Moon, and Eclipse on audio from Listening Library.