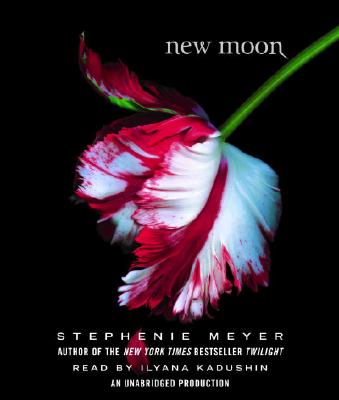 By Stephenie Meyer, Ilyana Kadushin (Read by)
$54.00
Unavailable at this time.

This is book number 2 in the Twilight Saga series.

I FELT LIKE I WAS TRAPPED IN ONE OF THOSE TERRIFYING NIGHTMARES…
For Bella Swan, there is one thing more important than life itself: Edward Cullen. But being in love with a vampire is even more dangerous than Bella ever could have imagined. Edward has already rescued Bella from the clutches of one evil vampire, but now, as their daring relationship threatens all that is near and dear to them, they realize their troubles may be just beginning. . . .
Legions of readers entranced by the New York Times bestseller Twilight are hungry for the continuing story of star-crossed lovers Bella and Edward. In New Moon, Stephenie Meyer delivers another irresistible combination of romance and suspense with a supernatural spin. Passionate, riveting, and full of surprising twists and turns, this vampire love saga is well on its way to literary immortality.

Stephenie Meyer was born on Christmas Eve in Hartford, Connecticut, but she has lived in Arizona since the age of four. She graduated from Brigham Young University with a degree in English Literature, and lives with her husband and three young sons.