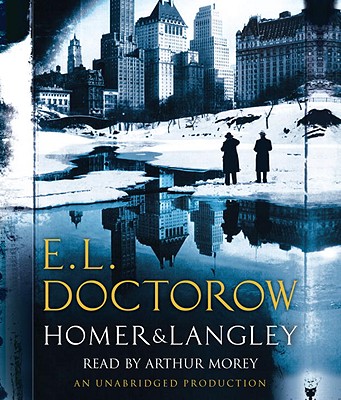 From Ragtime and Billy Bathgate to The Book of Daniel, World's Fair, and The March, the novels of E. L. Doctorow comprise one of the most substantive achievements of modern American fiction. Now, with Homer & Langley, this master novelist has once again created an unforgettable work.
Homer and Langley Collyer are brothers the one blind and deeply intuitive, the other damaged into madness, or perhaps greatness, by mustard gas in the Great War. They live as recluses in their once grand Fifth Avenue mansion, scavenging the city streets for things they think they can use, hoarding the daily newspapers as research for Langley's proposed dateless newspaper whose reportage will be as prophecy. Yet the epic events of the century play out in the lives of the two brothers wars, political movements, technological advances and even though they want nothing more than to shut out the world, history seems to pass through their cluttered house in the persons of immigrants, prostitutes, society women, government agents, gangsters, jazz musicians . . . and their housebound lives are fraught with odyssean peril as they struggle to survive and create meaning for themselves.
Brilliantly conceived, gorgeously written, this mesmerizing narrative, a free imaginative rendering of the lives of New York's fabled Collyer brothers, is a family story with the resonance of myth, an astonishing masterwork unlike any that have come before from this great writer.

E. L. Doctorow s works of fiction include "Welcome to Hard Times, The Book of Daniel, Ragtime, Loon Lake, World s Fair, Billy Bathgate, The Waterworks, City of God, The March, Homer & Langley, "and "Andrew s Brain. "Among his honors are the National Book Award, three National Book Critics Circle awards, two PEN/Faulkner awards, and the presidentially conferred National Humanities Medal. In 2009 he was shortlisted for the Man Booker International Prize, honoring a writer s lifetime achievement in fiction, and in 2012 he won the PEN/ Saul Bellow Award for Achievement in American Fiction, given to an author whose scale of achievement over a sustained career places him in the highest rank of American literature. In 2013 the American Academy of Arts and Letters awarded him the Gold Medal for Fiction. In 2014 he was honored with the Library of Congress Prize for American Fiction. "From the Hardcover edition.""