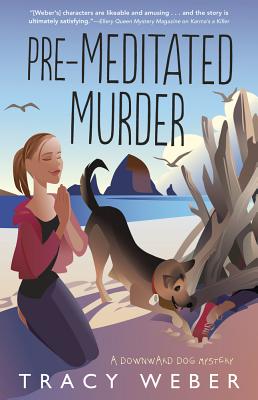 By Tracy Weber
$15.99
Unavailable at this time.

If Kate Doesn't Act Fast, the Only "I Do" in Michael's Future Will Be at His Trial

Yoga instructor Kate Davidson is ready to marry her boyfriend Michael, so she's disappointed when a special dinner doesn't end with a proposal. But disappointment turns to dismay and outrage as she learns the real problem: Michael is already married and his estranged wife is blackmailing him.

When his wife's body is found--by Kate and her dog, no less--Michael is strangely unable to remember where he was the night she died. Since Michael has no alibi, Kate steps up to uncover what happened. What she walks into is a tangled web of deceit, obsession, and immigration fraud . . . with Michael trapped in the middle.

"Lots of red herrings and potential motives eventually lead Kate to a surprising killer. Cozy fans will cheer her every step of the way."--Publishers Weekly

"If you're a fan of yoga, dogs, childbirth and murder cases, then Tracy Weber's A Fatal Twist is just what the fertility doctor ordered."--The Seattle Times

Tracy Weber is author of the award-winning Downward Dog Mystery series. Her first book in the series, Murder Strikes a Pose, won the Maxwell Award for Fiction and was nominated for the Agatha Award for Best First Novel. A certified yoga therapist, Tracy is the owner of Whole Life Yoga, a Seattle yoga studio, and she loves sharing her passion for yoga and animals in any way possible. Tracy and her husband Marc live in Seattle with their precocious German Shepherd pup Ana. When she's not writing, Tracy spends her time teaching yoga, trying to corral Ana, and sipping Blackthorn cider at her favorite ale house.