The Beaverton Presents Glorious and/or Free: The True History of Canada (Paperback) 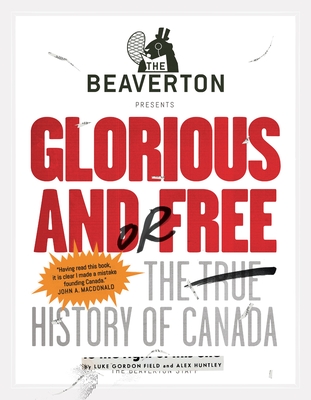 By Luke Gordon Field, Alex Huntley
$19.95
Unavailable at this time.

A hilarious tour through Canada's history, from the nation's most trusted news source: The Beaverton.

There is a new media empire in Canada--and unlike others, it is honest about being "fake news." Its satirical headlines have been misinforming Canadians across the country and the world, using parody to shine a light on the nation. What started as an immensely popular online newspaper led to a hit TV show delivering biting commentary on Canadian culture, politics, and the biggest news stories. Now, in its first book, The Beaverton looks back over Canada's past to show how we became the ridiculous nation we are today.

Through the lens of the venerable Beaverton, one of Canada's oldest and proudest newspaper, the editors share the headlines and articles that defined the times. From the challenging days of colonization ("Angry New France mother calls son by using all of his 329 middle and family names") to the earliest days of nationhood ("Paternity test confirms John A. actual father of Confederation"), from war heritage ("Vimy Ridge: Canada becomes a nation after killing Germans for Britain on French soil") right up to the twenty-first century ("Harper government offers apology to victims of first long-form census")--this is Canada like you've never seen it.

Part mock-history, part fake scrapbook, and fully illustrated with original art and historical images,* The Beaverton Presents Glorious and/or Free is a hilarious and ruthless stab at our national myths and legends. And, like all great satire, it's funny because it's true.

LUKE GORDON FIELD is editor-in-chief of the Beaverton website and co-executive producer of the critically acclaimed Beaverton television series. After attending Upper Canada College, Luke studied Canadian History at Queen’s University, graduating with distinction. He then completed his JD at Osgoode Hall Law School and took the next logical step: becoming a stand-up comedian and comedy writer. As a stand-up he has had the pleasure of touring all over Canada and very specific parts of America. His greatest passion remains The Beaverton, which he has run since 2012, helping it become the culturally dominant media empire it is today. He knows an absurd amount of trivia about William Lyon McKenzie King, and would be happy to tell you some if you’ll listen.

ALEX HUNTLEY is an editor and senior writer with The Beaverton. Born and raised in Niagara, he earned a BA with Honours in politics and history and a Master’s in Public Administration from Queen’s University, and has an expired basic first aid certificate from the distinguished school of St. John’s Ambulance. Since joining The Beaverton in 2012, this government policy analyst turned comedy writer has expanded the publication’s presence in Canada by living in Montreal, Whitehorse, and exotic Winnipeg while recruiting local writers. Having a love affair with Canadian history since childhood, he created The Beaverton’s Moments in Canadian History in 2013. Writing a book satirizing the nation’s story is a dream come true. He lives with his wife in Kingston.