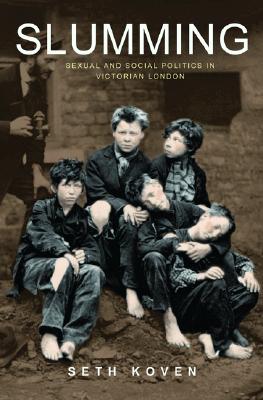 In the 1880s, fashionable Londoners left their elegant homes and clubs in Mayfair and Belgravia and crowded into omnibuses bound for midnight tours of the slums of East London. A new word burst into popular usage to describe these descents into the precincts of poverty to see how the poor lived: slumming. In this captivating book, Seth Koven paints a vivid portrait of the practitioners of slumming and their world: who they were, why they went, what they claimed to have found, how it changed them, and how slumming, in turn, powerfully shaped both Victorian and twentieth-century understandings of poverty and social welfare, gender relations, and sexuality.

The slums of late-Victorian London became synonymous with all that was wrong with industrial capitalist society. But for philanthropic men and women eager to free themselves from the starched conventions of bourgeois respectability and domesticity, slums were also places of personal liberation and experimentation. Slumming allowed them to act on their irresistible attraction of repulsion for the poor and permitted them, with society's approval, to get dirty and express their own dirty desires for intimacy with slum dwellers and, sometimes, with one another. Slumming elucidates the histories of a wide range of preoccupations about poverty and urban life, altruism and sexuality that remain central in Anglo-American culture, including the ethics of undercover investigative reporting, the connections between cross-class sympathy and same-sex desire, and the intermingling of the wish to rescue the poor with the impulse to eroticize and sexually exploit them. By revealing the extent to which politics and erotics, social and sexual categories overflowed their boundaries and transformed one another, Koven recaptures the ethical dilemmas that men and women confronted--and continue to confront--in trying to love thy neighbor as thyself.

Seth Koven is Associate Professor of History at Rutgers University and co-editor of Mothers of a New World: Maternalist Politics and the Origins of Welfare States. He has written on a variety of topics, including gender and welfare states, museum politics, sexual politics, and social reform, disability, and child welfare.