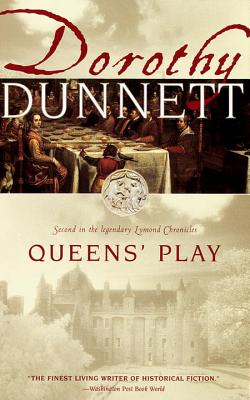 This is book number 2 in the Lymond Chronicles series.

This second book in the legendary Lymond Chronicles follows Francis Crawford of Lymond who has been abruptly called into the service of Mary Queen of Scots.

Though she is only a little girl, the Queen is already the object of malicious intrigues that extend from her native country to the court of France. It is to France that Lymond must travel, exercising his sword hand and his agile wit while also undertaking the most unlikely of masquerades, all to make sure that his charge's royal person stays intact.

Dorothy Dunnett was born in 1923 in Dunfermline, Fife, Scotland. Her time at Gillespie's High School for Girls overlapped with that of the novelist Muriel Spark. From 1940-1955, she worked for the Civil Service as a press officer. In 1946, she married Alastair Dunnett, later editor of The Scotsman.

Dunnett started writing in the late 1950s. Her first novel, The Game of Kings, was published in the United States in 1961, and in the United Kingdom the year after. She published 22 books in total, including the six-part Lymond Chronicles and the eight-part Niccolo Series, and co-authored another volume with her husband. Also an accomplished professional portrait painter, Dunnett exhibited at the Royal Scottish Academy on many occasions and had portraits commissioned by a number of prominent public figures in Scotland.

She also led a busy life in public service, as a member of the Board of Trustees of the National Library of Scotland, a Trustee of the Scottish National War Memorial, and Director of the Edinburgh Book Festival. She served on numerous cultural committees, and was a Fellow of the Royal Society of Arts. In 1992 she was awarded the Office of the British Empire for services to literature. She died on November 9, 2001, at the age of 78.

“Dorothy Dunnett is a storyteller who could teach Scheherazade a thing or two about suspense, pace and invention.”
—The New York Times

“[Lymond] is arguably the perfect romantic hero.”
—The Guardian

“Dorothy Dunnett is one of the greatest talespinners since Dumas . . . breathlessly exciting.”
—Cleveland Plain Dealer

“Dunnett is a name to conjure with. Her work exemplifies the best the genre can offer.”
—The Christian Science Monitor

“Ingenious and exceptional . . . its effect brilliant, its pace swift and colorful and its multi-linear plot spirited and absorbing.”
—Boston Herald

“Dunnett evokes the sixteenth century with an amazing richness of allusion and scholarship, while keeping a firm control on an intricately twisting narrative. She has another more unusual quality . . . an ability to check her imagination with irony, to mix high romance with wit.”
—Sunday Times (London)

“A very stylish blend of high romance and high camp. Her hero, the enigmatic Lymond, [is] Byron crossed with Lawrence of Arabia. . . . He moves in an aura of intrigue, hidden menace and sheer physical daring.”
—Times Literary Supplement (London)

“With shrewd psychological insight and a rare gift of narrative and descriptive power, Dorothy Dunnett reveals the color, wit, lushness . . . and turbulent intensity of one of Europe’s greatest eras.”
—Raleigh News and Observer