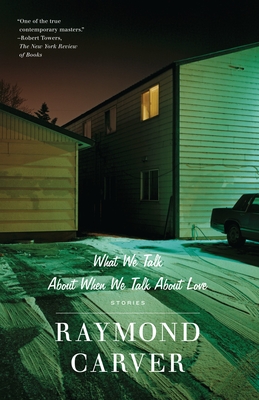 By Raymond Carver
$15.00
On our shelves now at one or more of our stores

In What We Talk About When We Talk About Love, Raymond Carver delights and enlightens us with an array of quietly profound vignettes on love, marriage, divorce, infidelity, grief, and loss. An understated masterpiece by a master craftsman.

Yes, this is the story that Michael Keaton and Edward Norton are staging in the Oscar-winning film Birdman. Raymond Carver was a master of the short story and his spare writing style and emotionally raw tales have inspired countless writers and some other filmmakers too. Besides Birdman, the first story in this collection has been made into two separate films. But no film can capture the power and intimacy of his writing.

In his second collection, including the iconic and much-referenced title story featured in the Academy Award-winning film Birdman, Carver establishes his reputation as one of the most celebrated short-story writers in American literature—a haunting meditation on love, loss, and companionship, and finding one’s way through the dark.

Raymond Carver was born in Clatskanie, Oregon, in 1938. His first collection of stories, Will You Please Be Quiet, Please (a National Book Award nominee in 1977), was followed by What We Talk About When We Talk About Love, Cathedral (nominated for the Pulitzer Prize in 1984), and Where I'm Calling From in 1988, when he was inducted into the American Academy of Arts and Letters. He died August 2, 1988, shortly after completing the poems of A New Path to the Waterfall.

"Carver's fiction is so spare in manner that it takes a time before one realizes how completely a whole culture and a whole moral condition is represented by even the most seemingly slight sketch. This second volume of stories is clearly the work of a full-grown master." —Frank Kermode

"Raymond Carver's America is...clouded by pain and the loss of dreams, but it is not as fragile as it looks. It is a place of survivors and a place of stories.... [Carver] has done what many of the most gifted writers fail to do: He has invented a country of his own, like no other except that very world, as Wordsworth said, which is the world to all of us." —Michael Wood, front page, The New York Times Book Review

"Splendid.... The collection as a whole, unlike most, begins to grow and resonate in a wonderful cumulative effect." —Tim O'Brien, Chicago Tribune Book World

"Carver not only enchants, he convinces." —J.D. Reed, Time