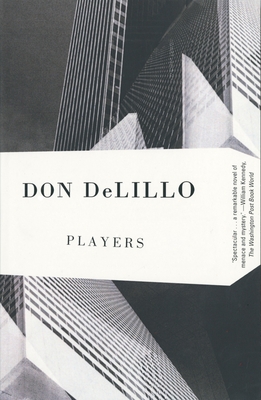 In Players DeLillo explores the dark side of contemporary affluence and its discontents. Pammy and Lyle Wynant are an attractive, modern couple who seem to have it all. Yet behind their "ideal" life is a lingering boredom and quiet desperation: their talk is mostly chatter, their sex life more a matter of obligatory "satisfaction" than pleasure. Then Lyle sees a man killed on the floor of the Stock Exchange and becomes involved with the terrorists responsible; Pammy leaves for Maine with a homosexual couple.... And still they remain untouched, "players" indifferent to the violence that surrounds them, and that they have helped to create.

Originally published in 1977 (before his National Book Award-winning White Noise and the recent blockbuster Underworld), Players is a fast-moving yet starkly drawn socially critical drama that demonstrates the razor-sharp prose and thematic density for which DeLillo is renowned today.

"The wit, elegance and economy of Don DeLillo's art are equal to the bitter clarity of his perceptions."--New York Times Book Review

Don DeLillo is the author of fifteen novels, including Zero K, Underworld, Falling Man, White Noise, and Libra. He has won the National Book Award, the PEN/Faulkner Award for Fiction, the Jerusalem Prize for his complete body of work, and the William Dean Howells Medal from the American Academy of Arts and Letters. In 2010, he was awarded the PEN/Saul Bellow Prize. The Angel Esmeralda was a finalist for the 2011 Story Prize and the PEN/Faulkner Award for Fiction. In 2012, DeLillo received the Carl Sandburg Literary Award for his body of work.