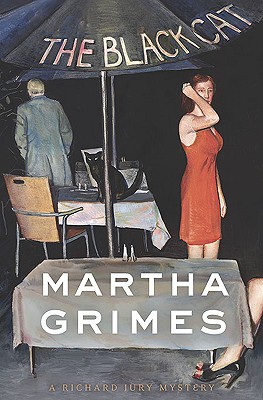 “Richard Jury is back in one of Martha Grimes's best mysteries yet! When a high class call girl - who turns out to be the local librarian - is found murdered behind The Black Cat pub, Superintendant Richard Jury is called in on the case. When a second female escort is murdered - and the Black Cat's black cat disappears, replaced by a different black cat - all of Jury's investigative skills are needed in a plot that will keep you guessing until the end.”
— Carol Schneck, Schuler Books & Music, Okemos, MI

The inimitable Richard Jury returns in a thrilling tale of mystery, madness, and mistaken identity

Three months have passed since Richard Jury was left bereft and guilt- ridden after his lover's tragic auto accident, and he is now more wary than ever. He is deeply suspicious when requested on a case far out of his jurisdiction in an outlying village where a young woman has been murdered behind the local pub. The only witness is the establishment's black cat, who gives neither crook nor clue as to the girl's identity or her killer's.

Identifying the girl becomes tricky when she's recognized as both the shy local librarian and a posh city escort, and Jury must use all his wits and intuition to determine the connection to subse­quent escort murders. Meanwhile, Jury's nemesis, Harry Johnson, continues to goad Jury down a dangerous path. And Johnson, along with the imperturbable dog Mungo, just may be the key to it all.

Written with Martha Grimes's trademark insight and grace, The Black Cat signals the thrilling return of her greatest character. The superintendent is a man possessed of prodigious analytical gifts and charm, yet vulnerable in the most perplexing ways.

Martha Grimes is the bestselling author of eighteen Richard Jury mysteries and also the acclaimed fiction Foul Matter, Cold Flat Junction, Hotel Paradise, The End of the Pier, and The Train Now Departing.