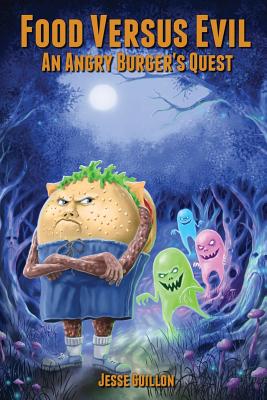 No one believed Burgerman when he said that ghosts were haunting his hometown. Even on a planet inhabited by living food products, his claim was just crazy enough to get him thrown into an asylum. But for all the good reasons for him to undergo psychological analysis (such as antisocial behaviour, chronic irritability and Compulsive Sarcasm Disorder), there's a much better argument for his release:

The ghosts are real. And their plans spell disaster for the whole planet.

Upon escaping the hospital, Burgerman finds himself caught in a conflict between the ghosts, the clandestine Egg Intelligence Agency and a mystical entity calling himself "the Soda Guru" - with each party having their own plans for this troubled young hamburger. Burgerman's only weapon: a magic bracelet that can teleport its wearer out of danger. However, each warp throws him further away from home.

Can this edible adventurer find a way to regain his old life? Or is he doomed to live a haunted, angry, perilous, angry, angry existence?