Before We Were Free (Prebound) 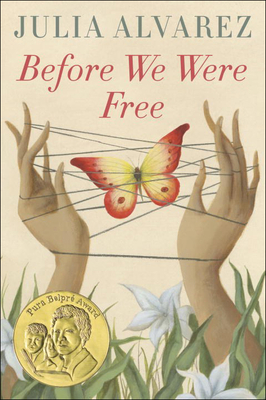 By Julia Alvarez
$20.25
Unavailable at this time.

Anita de la Torre never questioned her freedom living in the Dominican Republic. But by her twelfth birthday in 1960, most of her relatives have immigrated to the United States, her Tio Toni has disappeared without a trace, and the government's secret police terrorize her remaining family because of their suspected opposition to Trujillo's iron-fisted rule. Using the strength and courage of her family, Anita must overcome her fears and fly to freedom, leaving all that she once knew behind. From renowned author Julia Alvarez comes an unforgettable story about adolescence, perseverance, and one girl's struggle to be free. A Miami Herald Best Book of the Year
Winner of the Americas Award for Children's and Young Adult Literature
Winner of the Pura Belpre Award
An ALA-YALSA Best Book for Young Adults
An ALA-ALSC Notable Children's Book "A stirring work of art." --Publishers Weekly, Starred Review "A realistic and compelling account of a girl growing up too quickly while coming to terms with the cost of freedom." --The Horn Book, Starred Review "Diary entries written by the child while in hiding will remind readers of Anne Frank's story. . . . Readers will bite their nails as the story moves to its inexorable conclusion." --SLJ "Alvarez's story will spark intense discussion about politics and family." --Booklist

Julia Alvarez is the award-winning author of How the Garcia Girls Lost Their Accents and In the Time of the Butterflies. Her highly acclaimed books for young readers include The Secret Footprints, A Gift of Gracias, the Tia Lola series, Finding Miracles, and Return to Sender. Alvarez has won numerous awards for her work, including the Pura Belpre and Americas awards for her children's books, the Hispanic Heritage Award in Literature, and the F. Scott Fitzgerald Award for Outstanding Achievement in American Literature. In 2013, she was awarded the National Medal of Arts by President Obama. She is currently a writer-in-residence at Middlebury College and, together with her husband, Bill Eichner, established Alta Gracia, a sustainable coffee farm/literacy center in the Dominican Republic. Visit her on the Web at juliaalvarez.com.