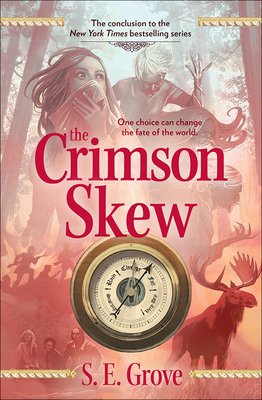 This is book number 3 in the Mapmakers Trilogy series.

The thrilling conclusion to S. E. Grove's New York Times bestselling Mapmakers Trilogy a historical, fantastical adventure perfect for fans of Philip Pullman
It is late August 1892, and Sophia Tims is coming home from a foreign Age, having risked her life in search of her missing parents. Now she is aboard ship, with a hard-earned, cryptic map that may help her find them at long last.
But her homecoming is anything but peaceful. Threatening clouds hang over New Orleans harbor. Sinkholes have been opening in Boston, swallowing parts of the city whole. Rogue weirwinds tear up the Baldlands. Worst of all, New Occident is at war, led by a prime minister who will do anything to expand the country westward. He has blackmailed Sophia's beloved uncle Shadrack into drawing the battle maps that will lead countless men and boys including Sophia's best friend, Theo to their deaths.
As Sophia puzzles out her next move, Shadrack is peeling back layers of government intrigue, and Theo is bracing himself to fight. A red fog of war is rising, and New Occident's future hangs in the balance . . .

S. E. Grove(segrovebooks.com)is a historian and world traveler. She spends most of her time reading about the early modern Spanish empire, writing about invented empires, and residing in Boston. Follow S. E. Grove on Twitter @segrovebooks."