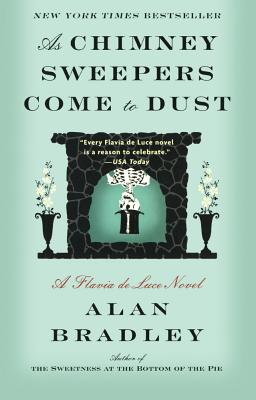 "NEW YORK TIMES" BESTSELLER
Flavia de Luce part Harriet the Spy, part Violet Baudelaire from Lemony Snicket's "A Series of Unfortunate Events" ("The New York Times Book Review") takes her remarkable sleuthing prowess to the unexpectedly unsavory world of Canadian boarding schools in the captivating new mystery from "New York Times "bestselling author Alan Bradley.
"Banished " is how twelve-year-old Flavia de Luce laments her predicament, when her father and Aunt Felicity ship her off to Miss Bodycote's Female Academy, the boarding school that her mother, Harriet, once attended across the sea in Canada. The sun has not yet risen on Flavia's first day in captivity when a gift lands at her feet. Flavia being Flavia, a budding chemist and sleuth, that gift is a charred and mummified body, which tumbles out of a bedroom chimney. Now, while attending classes, making friends (and enemies), and assessing the school's stern headmistress and faculty (one of whom is an acquitted murderess), Flavia is on the hunt for the victim's identity and time of death, as well as suspects, motives, and means. Rumors swirl that Miss Bodycote's is haunted, and that several girls have disappeared without a trace. When it comes to solving multiple mysteries, Flavia is up to the task but her true destiny has yet to be revealed.
Praise for "As Chimney Sweepers Come to Dust"
""
Flavia de Luce is] perhaps contemporary crime fiction's most original character to say she is Pippi Longstocking with a Ph.D. in chemistry (speciality: poisons) barely begins to describe her. "Maclean s"
""
Another treat for readers of all ages . . . "As Chimney Sweepers Come to Dust"] maintains the high standards Bradley set from the start. "Booklist"
""
Exceptional . . . The] intriguing setup only gets better, and Bradley makes Miss Bodycote's a suitably Gothic setting for Flavia's sleuthing. Through it all, her morbid narrative voice continues to charm. "Publishers Weekly "(starred review)
Even after all these years, Flavia de Luce is still the world's greatest adolescent British chemist/busybody/sleuth. "The Seattle Times"
""
Plot twists come faster than Canadian snowfall. . . . Bradley's sense of observation is as keen as gung-ho scientist Flavia's. . . . The results so far are seven sparkling Flavia de Luce mysteries. "Library Journal"
A rattling good girls own adventure yarn with an extensive cast of characters and suspects . . . When all is revealed, the links, misunderstandings and secrecy have a satisfying click. "Winnipeg Free Press"
A delightful installment in the series "LibraryReads"
Acclaim for Alan Bradley's beloved Flavia de Luce novels, winners of the Crime Writers Association Debut Dagger Award, Barry Award, Agatha Award, Macavity Award, Dilys Winn Award, and Arthur Ellis Award
If ever there were a sleuth who's bold, brilliant, and, yes, adorable, it's Flavia de Luce. "USA Today"
This idiosyncratic young heroine continues to charm. "The" "Wall Street Journal"
Delightful . . . a combination of Eloise and Sherlock Holmes. "The Boston Globe"

Alan Bradley is the internationally bestselling author of many short stories, children s stories, newspaper columns, and the memoir "The Shoebox Bible." His first Flavia de Luce novel, "The Sweetness at the Bottom of the Pie, "received the Crime Writers Association Debut Dagger Award, the Dilys Winn Award, the Arthur Ellis Award, the Agatha Award, the Macavity Award, and the Barry Award, and was nominated for the Anthony Award. His other Flavia de Luce novels are "The Weed That Strings the Hangman s Bag, A Red Herring Without Mustard," "I Am Half-Sick of Shadows," "Speaking from Among the Bones, The Dead in Their Vaulted Arches, "and" As Chimney Sweepers Come to Dust.""