Speaking from Among the Bones (Flavia de Luce Mysteries) (Prebound) 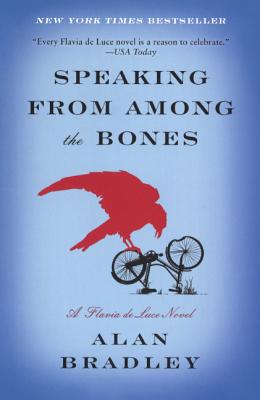 By Alan Bradley
$16.00
Unavailable at this time.

From award-winning author Alan Bradley comes the next cozy British mystery starring intrepid young sleuth Flavia de Luce, hailed by USA Today as one of the most remarkable creations in recent literature.
NEW YORK TIMES BESTSELLER
Eleven-year-old amateur detective and ardent chemist Flavia de Luce is used to digging up clues, whether they're found among the potions in her laboratory or between the pages of her insufferable sisters' diaries. What she is not accustomed to is digging up bodies. Upon the five-hundredth anniversary of St. Tancred's death, the English hamlet of Bishop's Lacey is busily preparing to open its patron saint's tomb. Nobody is more excited to peek inside the crypt than Flavia, yet what she finds will halt the proceedings dead in their tracks: the body of Mr. Collicutt, the church organist, his face grotesquely and inexplicably masked. Who held a vendetta against Mr. Collicutt, and why would they hide him in such a sacred resting place? The irrepressible Flavia decides to find out. And what she unearths will prove there's never such thing as an open-and-shut case.
Acclaim for Speaking from Among the Bones
Alan] Bradley scores another success. . . . This series is a grown-up version of Nancy Drew, the Hardy Boys and all those mysteries you fell in love with as a child.--TheSan Diego Union-Tribune
The precocious and irrepressible Flavia . . . continues to delight.--Publishers Weekly (starred review)
Fiendishly brilliant . . . Bradley has created an utterly charming cast of characters . . . as quirky as any British mystery fan could hope for.--Bookreporter
Delightful and entertaining.--San Jose Mercury News
Acclaim for Alan Bradley's beloved Flavia de Luce novels, winners of the Crime Writers' Association Debut Dagger Award, Barry Award, Agatha Award, Macavity Award, Dilys Winn Award, and Arthur Ellis Award
Every Flavia de Luce novel is a reason to celebrate.--USA Today
Delightful.--The Boston Globe, on The Sweetness at the Bottom of the Pie
Utterly beguiling.--People (four stars), on The Weed That Strings the Hangman's Bag
Irresistibly appealing.--The New York Times Book Review, on A Red Herring Without Mustard.

Alan Bradley is the internationally bestselling author of many short stories, children's stories, newspaper columns, and the memoir "The Shoebox Bible." His first Flavia de Luce novel, "The Sweetness at the Bottom of the Pie, "received the Crime Writers' Association Debut Dagger Award, the Dilys Winn Award, the Arthur Ellis Award, the Agatha Award, the Macavity Award, and the Barry Award, and was nominated for the Anthony Award. His other Flavia de Luce novels are "The Weed That Strings the Hangman's Bag, A Red Herring Without Mustard," and "I Am Half-Sick of Shadows."