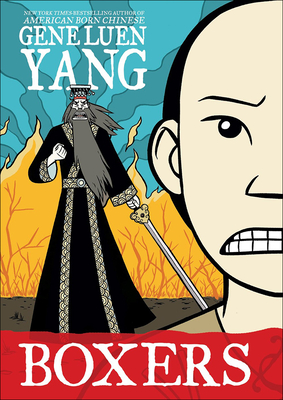 This is book number 1 in the Boxers & Saints series.

Little Bao has had enough. Harnessing the powers of ancient Chinese gods, he recruits an army of Boxers - commoners trained in kung fu who fight to free China from "foreign devils."

Against all odds, this grass-roots rebellion is violently successful. But nothing is simple. Little Bao is fighting for the glory of China, but at what cost? So many are dying, including thousands of "secondary devils" - Chinese citizens who have converted to Christianity.

Boxers & Saints "is an innovative new graphic novel in two volumes - the parallel stories of two young people caught up on opposite sides of a violent rift. "American Born Chinese "author Gene Luen Yang brings his clear-eyed storytelling and trademark magical realism to the complexities of the Boxer Rebellion and lays bare the foundations of extremism, rebellion, and faith.

Discover the other side of the Boxer Rebellion in "Saints - "the companion volume to "Boxers.

Gene Luen Yang began drawing comic books in the fifth grade. He was an established figure in the indie comics scene when he published his first book with First Second, "American Born Chinese, "which is now in print in over ten languages. "American Born Chinese"'s""critical and commercial success, along with its status as a National Book Award finalist and winner of the Printz Award, catapulted Yang into stardom as a major voice of our times.