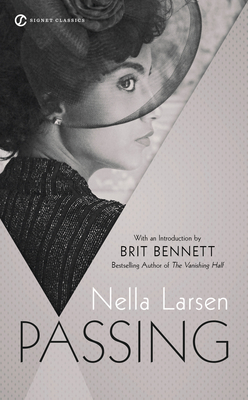 This Signet Classics edition of Passing includes an Introduction by Brit Bennett, the bestselling author of The Vanishing Half.

Irene Redfield is a Black woman living an affluent, comfortable life with her husband and children in the thriving neighborhood of Harlem in the 1920s. When she reconnects with her childhood friend Clare Kendry, who is similarly light-skinned, Irene discovers that Clare has been passing for a white woman after severing ties to her past—even hiding the truth from her racist husband.

Clare finds herself drawn to Irene’s sense of ease and security with her Black identity and longs for the community (and, increasingly, the woman) she lost. Irene is both riveted and repulsed by Clare and her dangerous secret, as Clare begins to insert herself—and her deception—into every part of Irene’s stable existence. First published in 1929, Larsen’s brilliant examination of the various ways in which we all seek to “pass,”  is as timely as ever.

Nella Larsen, one of the most acclaimed and influential writers of the Harlem Renaissance, was born Nellie Walker in Chicago on April 13, 1891. Her father was mixed-race, her mother was a Danish immigrant, and she struggled to find a community to which to belong. After working for some years as a nurse, primarily in the Bronx, Larsen became the first black woman to graduate from the New York Public Library School and worked in various branches before landing in Harlem, the center of African-American culture. She became active in Harlem's artistic community and wrote her first novel, Quicksand, published in 1928. A critical though not financial success, it was awarded a Bronze Medal by the Harmon Foundation in recognition of Distinguished Achievement Among Negroes in Literature. Her second novel, Passing, came out the following year. Larsen was the first African-American woman  to receive the Guggenheim Fellowship for creative writing. Due to personal and professional struggles following a highly publicized divorce, Larsen had stopped writing by the end of the 1930s. She resumed work as a nurse until her death in 1964.

Born and raised in Southern California, Brit Bennett graduated from Stanford University and later earned her MFA in fiction at the University of Michigan. Her debut novel The Mothers was a New York Times bestseller, and her second novel The Vanishing Half was an instant #1 New York Times bestseller. She is a National Book Foundation 5 Under 35 honoree and in 2021, she was chosen as one of Time’s Next 100 Influential People. Her essays have been featured in The New Yorker, the New York Times Magazine, The Paris Review, and Jezebel.

Praise for Nella Larsen and Passing

“It is a tragic story rooted in inescapable facts of American life: that whiteness conferred an almost universal unearned advantage, and that loyalty to a Black racial identity was not only an act of pride but also one of courage.”—The New York Times

“[Larsen’s novels] open up a whole world of experience and struggle that seemed to me, when I first read them years ago, absolutely absorbing, fascinating, and indispensable.”—Alice Walker