The Pilot's Daughter: A Novel (Paperback) 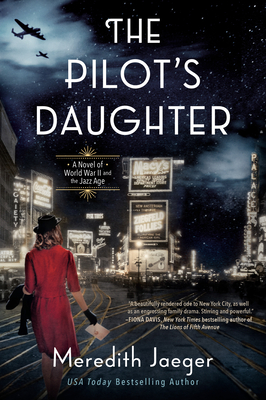 The glitzy days of 1920s New York meet the devastation of those left behind in World War II in a new, delectable historical novel from USA Today bestselling author Meredith Jaeger.

In the final months of World War II, San Francisco newspaper secretary Ellie Morgan should be planning her wedding and subsequent exit from the newsroom into domestic life. Instead, Ellie, who harbors dreams of having her own column, is using all the skills she's learned as a would-be reporter to try to uncover any scrap of evidence that her missing pilot father is still alive. But when she discovers a stack of love letters from a woman who is not her mother in his possessions, her already fragile world goes into a tailspin, and she vows to find out the truth about the father she loves—and the woman who loved him back.

When Ellie arrives on her aunt Iris's doorstep, clutching a stack of letters and uttering a name Iris hasn't heard in decades, Iris is terrified. She's hidden her past as a Ziegfeld Follies showgirl from her family, and her experiences in New York City in the 1920s could reveal much more than the origin of her brother-in-law's alleged affair. Iris's heady days in the spotlight weren't enough to outshine the darker underbelly of Jazz Age New York, and she's spent the past twenty years believing that her actions in those days led to murder.

Together the two women embark on a cross-country mission to find the truth in the City That Never Sleeps, a journey that just might shatter everything they thought they knew—not only about the past but about their own futures.

Inspired by a true Jazz Age murder cold case that captivated the nation, and the fact that more than 72,000 Americans still remain unaccounted for from World War II, The Pilot's Daughter is a page-turning exploration of the stories we tell ourselves and of how well we can truly know those we love.

Meredith Jaeger is the USA Today bestselling author of The Dressmaker's Dowry and Boardwalk Summer. Meredith was born and raised in Berkeley, California, and holds a BA in modern literature from the University of California, Santa Cruz. She lives outside San Francisco with her husband and daughter.

Praise for The Pilot's Daughter

"Jaeger’s latest is a beautifully rendered ode to New York City, as well as an engrossing family drama. In Ellie and Iris, she’s created two compassionate, conflicted heroines whose search for the truth resonates in all the best ways. Stirring and powerful."
—Fiona Davis, New York Times bestselling author of The Lions of Fifth Avenue

"Wow, wow, wow. What a page turner. The Pilot’s Daughter is the story of two women over two timelines, and the combined secrets that haunt them. I gasped. I cried. I cheered. The Pilot’s Daughter is one of the few books that truly earns the descriptor ‘unputdownable’. Iris and Ellie’s stories will stay with me for a long time."
—Sally Hepworth, New York Times bestselling author of The Good Sister

"Meredith Jaeger proves, yet again, that she is a brilliant storyteller. Layered with drama and danger, The Pilot’s Daughter is historical fiction at its finest. Jaeger masterfully alternates between 1945 San Francisco, where a talented and determined young woman struggles to find her place in a man’s world, and New York City’s glamorous Ziegfeld Theater, circa 1923, where a riveting, decades-old mystery is finally unraveled. The Pilot’s Daughter is a timeless, multigenerational masterpiece that will leave you breathless, hopeful, and deeply satisfied. A triumph of hope and love, forgiveness and empowerment, Jaeger weaves a beautifully rendered tale of romance and redemption that will linger long after the last page is turned. If you’re looking for the perfect blend of history and mystery, look no farther than Meredith Jaeger’s The Pilot’s Daughter. You won’t be disappointed!"
—Lori Nelson Spielman, New York Times bestselling author of The Life List

"Shifting effortlessly between two time periods, Jaeger weaves a poignant and suspenseful tale, building a layered mystery while she draws us deep into the deliciously glitzy and often dangerous world of Jazz Age New York. But it is the tender and endearing bond between Ellie and Iris that is the beating heart of this propulsive novel—their connection so heartfelt and authentic that makes it easy to root for both women as they journey to find answers—and forgiveness. I won’t soon forget Ellie or Iris, and though I raced through the pages to the satisfying end, I did so conflicted—I so didn’t want to give up their company!"
—Erika Montgomery, author of A Summer to Remember

"Meredith Jaeger's two previous novels sparked my love affair with historical fiction. The Pilot's Daughter once again showcases her remarkable talent in creating stunning worlds that are so enticing you'll never want to leave. Blending fact and fiction and alternating timelines between the glittering backdrop of the Ziegfeld Follies and the devastating reality of those left behind in World War II, The Pilot's Daughter takes us on an enthralling journey of two women determined to live by their own rules despite the strict societal expectations placed on them. Expertly written with compelling characters and an intriguing mystery begging for answers, this luminous, captivating story inspires, entertains, and completely satisfies."
—Samantha M. Bailey, USA Today and #1 national bestselling author of Woman on the Edge

"With a delectable mastery of not just one time period, but two, Meredith Jaeger spins a tantalizing tale of two determined women searching for the truth. Jaeger moves effortlessly between the glittering Jazz Age and the final months of World War II in this richly detailed, propulsive, absorbing read that brings early twentieth century New York to life on the page. From the glamour of the Ziegfeld Follies, to the despair of a daughter whose father is missing in action, Jaeger transports us back in time and straight into the hearts of two conflicted women--Ellie, and her aunt Iris--as they untangle the threads of a complicated past--and an uncertain future. You won't want to put The Pilot's Daughter down until you reach the satisfying end."—Kristin Harmel, New York Times bestselling author of The Forest of Vanishing Stars

"I've long been a fan of Meredith Jaeger, and her latest, THE PILOT'S DAUGHTER, is her best work yet. Ambitious Ellie is looking for clues that her missing father, a WWII pilot, is still alive. But amid her search, she discovers he may have harbored a dark secret. Ellie's search begins to intermingle with the scandalous history of her aunt Iris, whose former experience as a showgirl brings us straight into the heart of the 1920s Jazz Age--rife with its own unsolved mystery. In this layered tale of mystery and discovery, Jaeger masterfully develops the characters of two brave women who ultimately find closure by way of determination, self-empowerment, and forgiveness. "
—Sarah Penner, New York Times Bestselling author of The Lost Apothecary

“The Pilot’s Daughter is a captivating, richly detailed historical novel, following Ellie’s journey as she travels to New York with her aunt Iris to attempt to find out what happened to her missing pilot father in WWII. Meredith Jaeger artfully weaves the glittering but also dark Jazz Age of Iris’s New York, with Ellie’s search for answers there during WWII. An emotional and gorgeously woven story of strong women, fighting for the truth and ultimately, for themselves. I could not put this book down!”
—Jillian Cantor, USA Today bestselling author of In Another Time and Half Life

"Jaeger has crafted heroines worth rooting for in Ellie, a resourceful young journalist and Iris, a danseuse, who ignore the conventions of the day and strike out on their own journeys only to uncover a link between their family and a cold murder case that rocked the nation. An engrossing and addictive read with glimmering details of the jazz age and the war years, The Pilot's Daughter is one of my favorite books of the year!"
—Heather Webb, USA Today bestselling author of The Next Ship Home and Meet Me in Monaco

“From the first chapter of Meredith Jaeger’s The Pilot's Daughter, I plunged into a mystery that wouldn’t let me go until the final page. But it’s the two troubled heroines—Ellie and Iris—who pulled me into the heart of this rich, multigenerational family drama. Readers will enjoy the vicarious journey to both 1920s Manhattan and 1940s San Francisco, as they root for Ellie and Iris along the way. And they'll keep turning the pages to find out what happens next.”
—Laura Morelli, USA Today bestselling author of The Night Portrait and The Stolen Lady

"Packed with dark family secrets, the drama and glitz of the Ziegfeld Follies, and a World War II mystery, The Pilot’s Daughter is Meredith Jaeger at her best."
—Elise Hooper, author of The Other Alcott