We Own This City: A True Story of Crime, Cops, and Corruption (Hardcover) 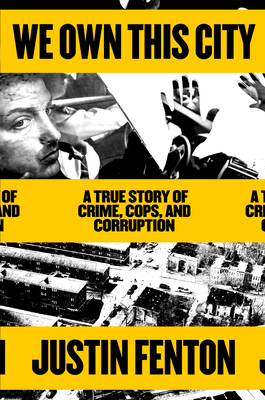 NEW YORK TIMES EDITORS’ CHOICE • The astonishing true story of “one of the most startling police corruption scandals in a generation” (The New York Times), from the Pulitzer Prize–nominated reporter who exposed a gang of criminal cops and their yearslong plunder of an American city

“A work of journalism that not only chronicles the rise and fall of a corrupt police unit but can stand as the inevitable coda to the half-century of disaster that is the American drug war.”—David Simon

Baltimore, 2015. Riots are erupting across the city as citizens demand justice for Freddie Gray, a twenty-five-year-old Black man who has died under suspicious circumstances while in police custody. Drug and violent crime are surging, and Baltimore will reach its highest murder count in more than two decades: 342 homicides in a single year, in a city of just 600,000 people. Facing pressure from the mayor’s office—as well as a federal investigation of the department over Gray’s death—Baltimore police commanders turn to a rank-and-file hero, Sergeant Wayne Jenkins, and his elite plainclothes unit, the Gun Trace Task Force, to help get guns and drugs off the street.

But behind these new efforts, a criminal conspiracy of unprecedented scale was unfolding within the police department. Entrusted with fixing the city’s drug and gun crisis, Jenkins chose to exploit it instead. With other members of the empowered Gun Trace Task Force, Jenkins stole from Baltimore’s citizens—skimming from drug busts, pocketing thousands in cash found in private homes, and planting fake evidence to throw Internal Affairs off their scent. Their brazen crime spree would go unchecked for years. The results were countless wrongful convictions, the death of an innocent civilian, and the mysterious death of one cop who was shot in the head, killed just a day before he was scheduled to testify against the unit.

In this urgent book, award-winning investigative journalist Justin Fenton distills hundreds of interviews, thousands of court documents, and countless hours of video footage to present the definitive account of the entire scandal. The result is an astounding, riveting feat of reportage about a rogue police unit, the city they held hostage, and the ongoing struggle between American law enforcement and the communities they are charged to serve.

A longtime investigate reporter based in Baltimore, Justin Fenton was part of the Baltimore Sun’s Pulitzer Prize finalist staff recognized for their coverage of the Baltimore riots that followed the death of Freddie Gray. He is now a reporter at the Baltimore Banner, and We Own This City is his first book.

“Fenton populates his narrative with a network of officers, informants and street dealers, all with different motivations and interests. . . . The overall effect is to capture the disorienting, churning quality of a city where the good guys and bad guys aren’t easily distinguished. . . . [Fenton] shows how, in our zeal to combat crime, we have allowed institutions to produce it.”—The New York Times Book Review

“Baltimore’s grim realities have been mined by talented writers like D. Watkins, Wes Moore and, most famously, celebrated author and TV producer David Simon, whose books and television series—Homicide: A Year on the Killing Streets, The Corner: A Year in the Life of an Inner-City Neighborhood and The Wire—deftly illuminated Charm City’s complex web of problems. One could be excused for wondering whether there is any more to say about Baltimore and crime. But the gripping new book We Own This City: A True Story of Crime, Cops, and Corruption puts that concern to rest.”—The Washington Post

“Fenton tells a story of bad people and bad attitudes. . . . His book reveals the way systemic discrimination operates, whom it affects and how it is sustained. His narrative is brisk and engaging.”—London Review of Books

“A standout examination of the failures of policing, laid out in context with greater systemic failures . . . We Own This City is a sobering and necessary account of one dramatic way that trust was destroyed, but it is as much a damning indictment of how that destruction grew out of a mixture of negligence, incompetence and hubris.”—The Wall Street Journal

“A remarkable story about the real-life collision of corruption, criminality, and racial profiling. Justin Fenton tells a well-written, wrenching narrative about a dark chapter in not only Baltimore’s history but in the legacy of disconnect between American citizens and those who are sworn to protect and serve them. This book is a must-read.”—Wes Moore, author of The Other Wes Moore and Five Days

“A masterful account of how police corruption takes root in a Baltimore plagued by crooked cops, oblivious leaders, and beleaguered citizens. The scandal at its heart is shocking in the sheer scope of its venality, and Fenton’s years of reporting lays it bare in novelistic, riveting detail. Here is a writer with a singular command of his story, spinning a dark tale so deftly that it’s impossible to look away.”—Evan Ratliff, author of The Mastermind

“A tale of chaos and corruption, We Own This City is a meticulously researched account in which one of our foremost criminal justice reporters unwinds one of the biggest scandals in the history of American policing.”—Wesley Lowery, Pulitzer Prize–winning journalist and author of They Can’t Kill Us All: Ferguson, Baltimore, and a New Era in America’s Racial Justice Movement