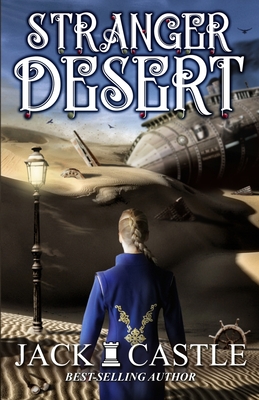 The Adventure Continues in this mind-blowing journey into the unimaginable.

Corporate has won. Heroes have been lost. Her Majesty's Air Ship, the Dauntless, lies scattered in pieces across a desert as cruel as it is bizarre. Even the legendary Colonel George Stapleton has been repurposed into a living painting for his captor's amusement, while his kidnapped daughter has become the Lamppost Man's unwilling disciple.

From the ashes, rise a few familiar faces-and a few new ones: the Leftenant, a ghost of her former self; the southern rogue, Corporal Dawson; and the assassin, fangirl Harper (along with her sidekick, the not-so-white rabbit). This band of misfits may just be the one thing that prevents the extinction of all humanity.

"A fantastic journey and wildly innovative as only Jack Castle could conceive it, Stranger Desert takes us on another imaginative, fun, action-packed adventure through his beloved universe, where futuristic theme parks dominate a civilization totally dependent on technology and entertainment."