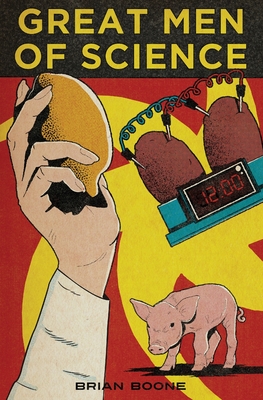 So things didn't go the way they were supposed to for Albert Malfort. Since his project didn't win the college-capping science fair -- he propelled a teacup pig five minutes through time -- he didn't land a fancy R&D job at Gray Labs, a think tank and retail juggernaut, nor did he escape the shadow of his father, an insane pariah of science and former Gray Labs employee who badmouthed the boss. Of course, that's all because the smug and wealthy Magnus Riptide destroyed Albert's project; his project proved the charisma reservoir in his brain allowed him to get away with anything. Albert wound up working as a lackey at Gray Labs, until they wronged him, so he stole a bunch of equipment, and conducted another time travel experiment that opened up an intern-swallowing time rift. Reduced to making weaponized robots in his garage for rogue tyrants, Albert gets the opportunity to put his life back on track when he's visited by Magnus, who needs his help. It would seem that Magnus, after accidentally winning a Nobel Prize, discovering a new number, and starring on the hit crime-drama The Scientist, made a miniature, evil clone of Thomas Edison, who traveled back to 1931 (via Albert's time rift) to steal every patent that ever existed. Will Albert and Magnus find a way to stop Edison from ruining science for everybody? Or will they actually work together and become, you know, Great Men of Science (and maybe friends)?