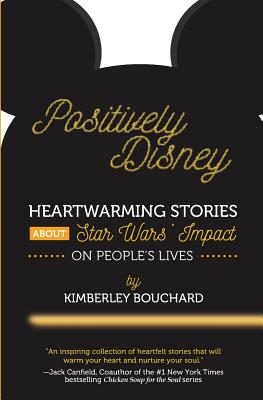 By Kimberley Bouchard
$15.95
On our shelves now:

This is book number 5 in the Positively Disney series.

Experience a new realm of Positively Disney in this compilation of moving, emotionally driven stories about how Star Wars has affected the lives of the actors, creative talent and fans around the world

What was it really like to be Princess Leia?

Learn about the lives of the actors and creative talent as they share their experiences with the Star Wars franchise with stories on set, behind the scenes and their lives before and after the films.

Hear about the man behind the Belgium Prop Crew who builds props for the premieres and conventions throughout the world.

Who is the running Stormtrooper who has run miles and miles and raises money for charity?

R2-KT, the little droid loved around the world and the man behind the creation of the largest costuming charitable organization in the world.

What does it take to be an Imagineer on Star Wars: Galaxy's Edge?