The God of the Hive: A novel of suspense featuring Mary Russell and Sherlock Holmes (Hardcover) 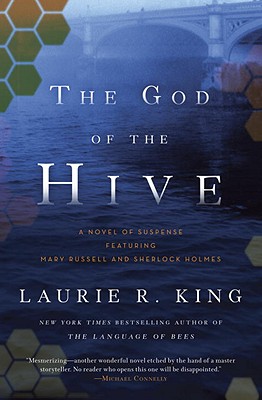 In Laurie R. King’s latest Mary Russell–Sherlock Holmes mystery, the acclaimed New York Times bestselling author delivers a thriller of ingenious surprises and unrelenting suspense—as the famous husband and wife sleuths are pursued by a killer immune from the sting of justice.

It began as a problem in one of Holmes’ beloved beehives, led to a murderous cult, and ended—or so they’d hoped—with a daring escape from a sacrificial altar. Instead, Mary Russell and her husband, Sherlock Holmes, have stirred the wrath and the limitless resources of those they’ve thwarted. Now they are separated and on the run, wanted by the police, and pursued across the Continent by a ruthless enemy with powerful connections.

Unstoppable together, Russell and Holmes will have to survive this time apart, maintaining tenuous contact only by means of coded messages and cryptic notes. With Holmes’ young granddaughter in her safekeeping, Russell will have to call on instincts she didn’t know she had. But has the couple already made a fatal mistake by separating, making themselves easier targets for the shadowy government agents sent to silence them?

From hidden rooms in London shops and rustic forest cabins to rickety planes over Scotland and boats on the frozen North Sea, Russell and Holmes work their way back to each other while uncovering answers to a mystery that will take both of them to solve. A hermit with a mysterious past and a beautiful young female doctor with a secret, a cruelly scarred flyer and an obsessed man of the cloth, Holmes’ brother, Mycroft, and an Intelligence agent who knows too much: Everyone Russell and Holmes meet could either speed their safe reunion or betray them to their enemies—in the most complex, shocking, and deeply personal case of their career.

Laurie R. King is the "New York Times" bestselling author of ten Mary Russell mysteries, five contemporary novels featuring Kate Martinelli, and the acclaimed novels A Darker Place, Folly, Keeping Watch, and Touchstone. She lives in Northern California where she is currently at work on her next novel.

“The great marvel of King’s series is that she’s managed to preserve the integrity of Holmes’s character and yet somehow conjure up a woman astute, edgy, and compelling enough to be the partner of his mind as well as his heart.” —Washington Post Book World

"The God of the Hive is mesmerizing—another wonderful novel etched by the hand of a master storyteller.  No reader who opens this one will be disappointed." —Michael Connelly, author of The Scarecrow

"A dazzling continuation of the adventures of the world’s most famous beekeeper, and his equally daunting "apprentice," The God of the Hive will astonish and delight even the most seasoned of Holmes’ devotees." —Katherine Neville, The Fire

"The Mary Russell series is the most sustained feat of imagination in mystery fiction today, and this is the best installment yet." —Lee Child, author of Gone Tomorrow

"Without a doubt, King is the master of Sherlockian authors." —Gayle Lynds, author of The Book of Spies

"All it takes is the very first page of the newest installment in Laurie R. King’s brilliant series for and you’re gone...disappearing into an artfully crafted, creative and craft world...This is historical suspense at its best, rich with atmosphere, mystery, psychological insight and complex, fascinating characters. But it’s not just the plot of Russell’s world, or how she matches wits with Holmes that makes King’s books such standouts, it’s how she brings heart and soul to great detective novels." —M.J Rose, author of The Hypnotist