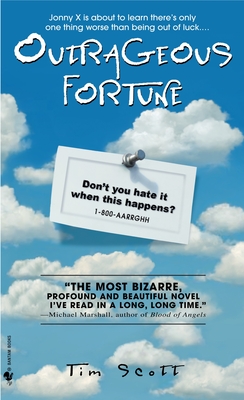 In this outrageously funny, outrageously inventive debut, one of the most outrageously talented new writers to break onto the sci-fi scene in decades asks the most loaded question of all . . .

“Don’t you hate it when this happens?”

. . . that’s what the business card asks Jonny X67, dream architect to the rich and jaded. It’s all the thieves who stole his house left behind. And if that weren’t bad enough, a saleswoman named Caroline E61 drops from the sky to sell him a set of encyclopedias and won’t take no for an answer. Can his luck get any worse?

In this rip-roaring roller-coaster ride through a brilliantly imagined future of paranoid absurdity, Jonny X will learn the answer soon enough when he falls afoul of a lunatic motorcycle gang nicknamed the Four Horsemen of the Apocalypse, a relentless Belgian assassin, and his own irate girlfriend. Traversing a cityscape whose neighborhoods are organized by musical genres, running into joke-telling elevators and holographic computer viruses, Jonny is about to learn what a nightmare it’s going to be to get his old life back in a reality warping faster than the speed of the imagination. Outrageous Fortune heralds a marvelous new talent sure to be delightfully altering the minds of readers for years to come.

Tim Scott graduated from Cambridge University, England, and decided to use his hard fought education to work a plasterer, decorator and delivery driver.

He writing career began with a training video which warned office staff that falling over could be dangerous. He then went on to write and appear on BBC Radio 4 in around fifty comedy half hours—and finally ended up being given his own late night comedy television series on network ITV. It ran for twenty six episodes and was so surreal that even Ionesco or Salvador Dali would have been shaking their heads in confusion.

He has written a large number of children's books, and also for children's television. He more recently became a television director and in 2003 won a BAFTA for co writing and directing a children's series, "Ripley and Scuff," for the BBC. He likes to travel around the world, often in search of surf.

“The most bizarre, profound and beautiful novel I've read in a long, long time.”—Michael Marshall (Smith), author of Blood of Angels

“Outrageous Fortune is captivating, absorbing, infuriating and disturbingly funny; it takes you hostage on the very first page and refuses to let you go until all its demands have been met.”—Tom Holt, author of In Your Dreams

“Rarely does a first sf novel have as much energy and creativity as Scott’s madcap, mischievously irreverent depiction of a definitely post-postmodern future. Consider this the opening salvo of one of the genre’s most promising and original new voices in years.”—Booklist

“[A] lunatic jaunt through a cartoon future.”—Kirkus Reviews