The Collapsium (The Queendom of Sol #1) (Mass Market) 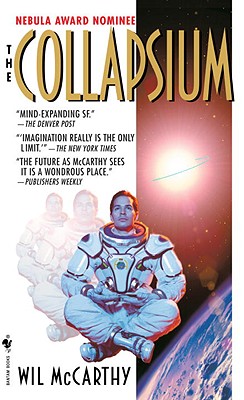 This is book number 1 in the The Queendom of Sol series.

In this stunningly original tale, acclaimed author Wil McCarthy imagines a wondrous future in which the secrets of matter have been unlocked and death itself is but a memory. But it is also a future imperiled by a bitter rivalry between two brilliant scientists--one perhaps the greatest genius in the history of humankind; the other, its greatest monster.

In a world of awesome technology, the deadly substance called collapsium has given humans all the powers and caprices--including immortality--of the gods they once worshiped. Composed of miniature black holes, collapsium allows the instantaneous transmission of information and matter--as well as humans--throughout the solar system. But while its reclusive inventor, Bruno de Towaji, next dreams of probing the farthest reaches of spacetime, Marlon Sykes, his ambitious rival in science--and in love--has built an awesome telecommunications network by constructing a ring of collapsium around the sun. It appears Sykes may be the victor--until a ruthless saboteur attacks the ring and sends it falling toward the sun. Now the two scientists must put aside personal animosity to prevent the destruction of the solar system--and every living thing within it.

Wil McCarthy, after ten years of rocket science with Lockheed Martin, traded the hectic limelight of the space program for the peace and quiet (ha!) of commercial robotics at Omnitech, where he works as a research and development hack.

He writes a monthly column for the SciFi Channel's news magazine, and his less truthful writings have appeared in Aboriginal SF, Analog, Interzone, Asimov's Science Fiction, Science Fiction Age, and various anthologies. His most recent novel, Bloom, was selected as a New York Times Notable Book.

"McCarthy is an entertaining, intelligent, amusing writer, with Heinlein's knack for breakneck plotting and, at the same time, Clarke's thoughtfulness."
--Booklist

“A standout novel. McCarthy has added a lyricism reminiscent of Roger ZelaZny to cutting-edge hard science in the manner of Robert L. Forward.”
--The Denver Post

“‘Imagination really is the only limit.’”
--The New York Times

“The future as McCarthy sees it is a wondrous place.”
--Publishers Weekly