The Strange Adventures of Rangergirl: A Novel (Paperback) 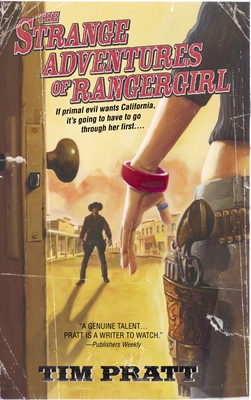 In this debut novel, acclaimed short-story author Tim Pratt delivers an exciting heroine with a hidden talent—and a secret duty. Witty and suspenseful, here is a contemporary love song to the West that was won and the myths that shape us. . . .

As night manager of Santa Cruz’s quirkiest coffeehouse, Marzi McCarty makes a mean espresso, but her first love is making comics. Her claim to fame: The Strange Adventures of Rangergirl, a cowpunk neo-western yarn. Striding through an urban frontier peopled by Marzi’s wild imagination, Rangergirl doles out her own brand of justice. But lately Marzi’s imagination seems to be altering her reality. She’s seeing the world through Rangergirl’s eyes—literally—complete with her deadly nemesis, the Outlaw.

It all started when Marzi opened a hidden door in the coffeehouse storage room. There, imprisoned among the supplies, she saw the face of something unknown . . . and dangerous. And she unwittingly became its guard. But some primal darkness must’ve escaped, because Marzi hasn’t been the same since. And neither have her customers, who are acting downright apocalyptic.

Now it’s up to Marzi to stop this supervillainous superforce that’s swaggered its way into her world. For Marzi, it’s the showdown of her life. For Rangergirl, it’s just another day. . . .

Tim Pratt has been nominated for the Nebula award and for the Campbell Best New Writer award, and his fiction has appeared in Best American Short Stories and The Year's Best Fantasy and Horror. He lives in Oakland, California, where he co-edits a literary 'zine, Flytrap, with his fiancee, Heather Shaw.

"Tim Pratt's The Strange Adventures of Ranger Girl is a two-fisted meta-fiction of old west mythos and modern day -- sharp writing, cool characters, fascinating ideas, and the courage to have fun. Readers of comics and classics and both will enjoy this novel." -Jeffrey Ford, author of The Portrait of Mrs. Charbuque


"Rangergirl is a fine blend of imaginative and engaging -- a tale well-told." --Cory Doctorow, co-editor of Boing Boing and author of Someone Comes to Town, Someone Leaves Town