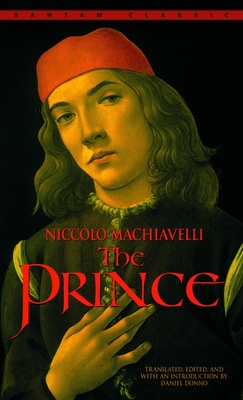 Here is the world's most famous master plan for seizing and holding power.  Astonishing in its candor The Prince even today remains a disturbingly realistic and prophetic work on what it takes to be a prince . . . a king . . . a president.  When, in 1512, Machiavelli was removed from his post in his beloved Florence, he resolved to set down a treatise on leadership that was practical, not idealistic.  In The Prince he envisioned would be unencumbered by ordinary ethical and moral values; his prince would be man and beast, fox and lion.  Today, this small sixteenth-century masterpiece has become essential reading for every student of government, and is the ultimate book on power politics.

Peter Constantine, winner of the PEN Translation Prize and a National Translation Award, has earned wide acclaim for his translation of The Undiscovered Chekhov and of the complete works of Isaac Babel, as well as for his Modern Library translations, which include The Essential Writings of Machiavelli, Gogol’s Taras Bulba, Voltaire’s Candide, and Tolstoy’s The Cossacks.

Albert Russell Ascoli is Gladys Arata Terrill Distinguished Professor of Italian Studies at the University of California, Berkeley, and was awarded the Rome Prize for study at the American Academy in Rome.

“[Machiavelli] can still engage our attention with remarkable immediacy, and this cannot be explained solely by the appeal of his ironic observations on human behaviour. Perhaps the most important thing is the way he can compel us to reflect on our own priorities and the reasoning behind them; it is this intrusion into our own defenses that makes reading him an intriguing experience. As a scientific exponent of the political art Machiavelli may have had few followers; it is as a provocative rhetorician that he has had his real impact on history.” –from the Introduction by Dominic Baker-Smith