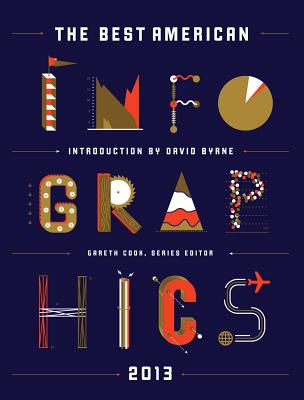 By Gareth Cook (Editor), David Byrne (Introduction by)
Unavailable at this time.
Out of print

The rise of infographics across virtually all print and electronic media—from a striking breakdown of classic cocktails to a graphic tracking 200 influential moments that changed the world to visually arresting depictions of Twitter traffic—reveals patterns in our lives and our world in fresh and surprising ways. In the era of big data, where information moves faster than ever, infographics provide us with quick, often influential bursts of art and knowledge—on the environment, politics, social issues, health, sports, arts and culture, and more—to digest, to tweet, to share, to go viral.

The Best American Infographics captures the finest examples from the past year, including the ten best interactive infographics, of this mesmerizing new way of seeing and understanding our world.

Series editor GARETH COOK is a Pulitzer Prize–winning journalist, a contributor to the New York Times Magazine, and the editor of Mind Matters, Scientific American's neuroscience blog. He helped invent the Boston Globe’s Sunday Ideas section and served as its editor from 2007 to 2011. His work has also appeared on NewYorker.com and in Wired, Scientific American, and The Best American Science and Nature Writing.

DAVID BYRNE is a renowned artist, the force behind the Talking Heads and creator of the highly regarded record label Luaka Bop. He is a photographer, film director, and author.

"Not only is it a thing of beauty it’s also a good read, with thoughtful explanations of each winning graphic and an entertaining forward by David Byrne."
—Nature