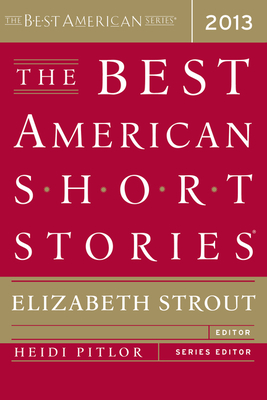 By Elizabeth Strout, Heidi Pitlor (Editor)
$14.95
Out of stock, usually available in 3-10 days

“As our vision becomes more global, our storytelling is stretching in many ways. Stories increasingly change point of view, switch location, and sometimes pack as much material as a short novel might,” writes guest editor Elizabeth Strout. “It’s the variety of voices that most indicates the increasing confluence of cultures involved in making us who we are.” The Best American Short Stories 2013 presents an impressive diversity of writers who dexterously lead us into their corners of the world.

In “Miss Lora,” Junot Díaz masterfully puts us in the mind of a teenage boy who throws aside his better sense and pursues an intimate affair with a high school teacher. Sheila Kohler tackles innocence and abuse as a child wanders away from her mother, in thrall to a stranger she believes is the “Magic Man.” Kirstin Valdez Quade’s “Nemecia” depicts the after-effects of a secret, violent family trauma. Joan Wickersham’s “The Tunnel” is a tragic love story about a mother’s declining health and her daughter’s helplessness as she struggles to balance her responsibility to her mother and her own desires. New author Callan Wink’s “Breatharians” unsettles the reader as a farm boy shoulders a grim chore in the wake of his parents’ estrangement.
“Elizabeth Strout was a wonderful reader, an author who knows well that the sound of one’s writing is just as important as and indivisible from the content,” writes series editor Heidi Pitlor. “Here are twenty compellingly told, powerfully felt stories about urgent matters with profound consequences.”

Elizabeth Strout is the author of the New York Times bestseller The Burgess Boys; Olive Kitteridge, for which she was awarded the Pulitzer Prize; the national bestseller Abide with Me; and Amy and Isabelle, winner of the Los Angeles Times Art Seidenbaum Award and the Chicago Tribune Heartland Prize. She has also been a finalist for the PEN/Faulkner Award and the Orange Prize in London.

HEIDI PITLOR is a former senior editor at Houghton Mifflin Harcourt and has been the series editor for The Best American Short Stories since 2007. She is the author of the novels The Birthdays and The Daylight Marriage.