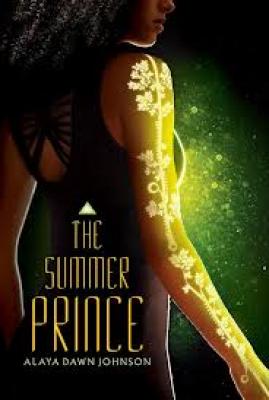 “June Costa lives in a pyramid in Palmares Tres. Her society is a matriarchy and has been since most of Earth was ravaged. While a Queen rules, each year there is a Summer King, a young man chosen to co-rule for one year. After his year of power, the Summer King is killed. But what happens when both June and her best friend fall in love with Enki, the new Summer King? This book has it all: a dystopian world, romance, art, and the struggles of coming of age. This book will steal your heart!”
— Marika McCoola, Odyssey Bookshop, South Hadley, MA

A heart-stopping story of love, death, technology, and art set amid the tropics of a futuristic Brazil.
The lush city of Palmares Tres shimmers with tech and tradition, with screaming gossip casters and practiced politicians. In the midst of this vibrant metropolis, June Costa creates art that's sure to make her legendary. But her dreams of fame become something more when she meets Enki, the bold new Summer King. The whole city falls in love with him (including June's best friend, Gil). But June sees more to Enki than amber eyes and a lethal samba. She sees a fellow artist.

Together, June and Enki will stage explosive, dramatic projects that Palmares Tres will never forget. They will add fuel to a growing rebellion against the government's strict limits on new tech. And June will fall deeply, unfortunately in love with Enki. Because like all Summer Kings before him, Enki is destined to die.

Pulsing with the beat of futuristic Brazil, burning with the passions of its characters, and overflowing with ideas, this fiery novel will leave you eager for more from Alaya Dawn Johnson.

Alaya Dawn Johnson's first novel for young adults, The Summer Prince, received three starred reviews, was longlisted for the National Book Award, and was a Kirkus Best Book of the Year. She is also the author of Love Is the Drug. She grew up in Washington, DC, attended Columbia University, and now lives in New York City.

"In her YA debut, Johnson (the Spirit Binders series) depicts a future that's recognizably Brazilian and human...With its complicated history, founding myth, and political structure, Palmares Três is compelling, as is the triple bond between June, Enki, and Gil as they challenge their world's injustices." -- Publishers Weekly, starred review

"As the trio dances-often literally-around one another, June must negotiate between the extremes of stasis and post-humanism, learn to see beyond herself, discover the meaning of integrity, and maybe even save her rotten-at-the-core and best-beloved city. Luminous." -- Kirkus Reviews, starred review

"In this YA debut, Johnson paints a brilliant picture of a seemingly lush paradise hiding a core rotted by class stratification, creative stagnation, and disenfranchisement. Evocative, disturbing, and exhilarating, this story leaves much for the reader to ponder, from the nuanced characters to fascinating central themes, including the impact of technology and the role of isolationism in a perilous world. Like leaping into cold water on a hot day, this original dystopian novel takes the breath away, refreshes, challenges, and leaves the reader shivering but yearning for another plunge." -- Booklist, starred review

"In precise prose Johnson evokes an utterly foreign setting, complete with technologies that push at the limits of what it means to be human, and the relationships that delineate the social landscape are intriguingly unconventional and startling in their intensity. The story itself is thematically rich, encompassing the political nature of art in a time of vast upheaval, the potential of power to corrupt, the tension between tradition and innovation, and the toils and rewards of underground creative expression.... An imaginative and thoroughly realized addition to the sci-fi genre." -- Horn Book

"Rife with political turmoil and seeped in culture, this unique and highly fantastical dystopian romance is both intriguing and imaginative. Johnson excels at building rich and gorgeously complex worlds, and her prose shines with a sophistication that's uncommon in YA literature. This beautifully written novel will likely find a home with fans of Alison Croggon and Rachel Hartman." -- School Library Journal