For Today I Am a Boy (Paperback) 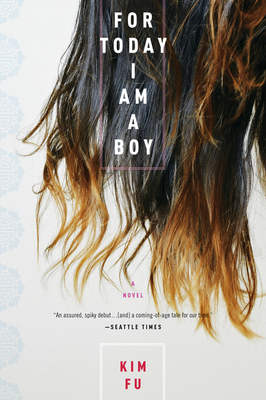 A stunning debut pioneering in its accurate portrayal of a first generation Chinese immigrant family (refreshingly free of stereotypes) and the pressure of the expectations, both societal and familial, forced upon them in a contradiction of identity. Within the first page, I was drawn to Fu's lyrical writing and vibrant characters that gradually intertwined with quiet brilliance and wit.
Fu explores the debacle of what life is when constricted to a suffocating outlook of self-denial - what are we willing to sacrifice and suffer though in order for a few sparing moments of authenticity and the happiness it brings? Is complacency all we can accept when faced with overwhelming fear?
All in all, an essential and engrossing read from an author whose further works I will be keeping an eye out for.
— From Avery

At birth, Peter Huang is given the Chinese name Juan Chaun, “powerful king.” To his parents, newly settled in small-town Ontario, he is the exalted only son in a sea of daughters, the one who will finally fulfill his immigrant father’s dreams of Western masculinity. Peter and his sisters grow up in an airless house of order and obligation, though secrets and half-truths simmer beneath the surface. At the first opportunity, each of the girls lights out on her own. But for Peter, escape is not as simple as fleeing his parents’ home. Though his father crowned him “powerful king,” Peter knows otherwise. He knows he is really a girl. With the help of his far-flung sisters and the sympathetic souls he finds along the way, Peter inches ever closer to his own life, his own skin, in this darkly funny, emotionally acute, stunningly powerful debut.

“Sensitively wrought . . . For Today I Am a Boy is as much about the construction of self as the consequences of its unwitting destruction—and what happens when its acceptance seems as foreign as another country.” —New York Times Book Review

“Subtle and controlled, with flashes of humor and warmth.” —Slate

“Keeps you reading. Told in snatches of memory that hurt so much they have the ring of truth.” —Bust magazine

KIM FU is the author of the novel For Today I Am a Boy, which won the Edmund White Award and was a finalist for the PEN/Hemingway Award and the Lambda Literary Award, and was a New York Times Book Review Editors’ Choice. Fu is also the author of the poetry collection How Festive the Ambulance. She lives in Seattle, Washington.

“Sensitively wrought…For Today I Am a Boy is as much about the construction of self as the consequences of its unwitting destruction—and what happens when its acceptance seems as foreign as another country.” —New York Times Book Review

“Subtle and controlled, with flashes of humor and warmth.” —Slate

“Keeps you reading. Told in snatches of memory that hurt so much they have the ring of truth.” —BUST Magazine

“From the first sentence of the prologue, it’ll be hard to resist For Today I Am a Boy…This is an absolutely gorgeously told story that author Kim Fu hands us.” —Washington Blade

“A well thought out and perfectly executed story…Heartbreaking and beautiful.” —Bustle

“For Today I Am a Boy is beautiful and captivating. Kim Fu reminds us that the human condition is one of change—of becoming, of overcoming—and this novel, in all its complexity, demonstrates how to do so with grace.” —Justin Torres, We the Animals

“A unique and mesmerizing story populated with characters who are fragile and strong all at once. An important and rewarding read.” —Steven Galloway, The Cellist of Sarajevo

“Fresh and pitch-perfect. Fu orchestrates a collision of culture, generation, gender, and place, each crashing head-on with her true observations and dark humor.” —Michael Christie, author of The Beggar’s Garden

“The world doesn’t need many new novels, but the world needs this one.” —Keith Maillard, author of Gloria

"A beautifully realized debut novel from a truly fierce new voice, it tells the story of a woman born as Peter Huang to a Chinese immigrant family in a small Canadian town. Kim Fu is incredible." —Alexander Chee, author of Edinburgh and the forthcoming The Queen of the Night

"Uncommonly moving...An extraordinarily accomplished first novel, and Fu is a thrilling new voice. She’s at once compassionate toward her characters and uncompromising in her refusal of the usual novelistic resolutions of questions that remain intractable in lived experience. Lyrical, sometimes brutal, always beautiful, this is a brilliant book." —Garth Greenwell, author of Mitko and the forthcoming What Belongs to You

“Kim Fu has already proven herself to be an interesting author…A lot more people will know her name before long.” —National Post

“Fu has written a novel about alienation without lapsing  into self-pity: a book that not only charts an outsider’s perspective, but the relationships that form, enrich, and complicate his journey…It has become cliché to hail an exciting ‘new voice’ in fiction, and many are drowned out by their own hype. In so convincingly transporting her reader to a perspective still relatively new to contemporary fiction, Kim Fu should be an exception.” —The Globe and Mail

“For Today I Am a Boy is a remarkable book, rare in its subject matter and painstakingly crafted by a writer with an obvious consideration for precise, beautiful language.” —Sydney Morning Herald

“Fu’s writing throughout is delicate and measured, and she excels at showcasing the subtle interior life of Peter as he gradually discovers who he is.” —ZYZZYVA

“A stunning, striking read. It explores a variety of identities and experiences, seeking to find the eager, tender heart that quietly beats within us all…Fu’s novel asks us to think about a community of characters, some of whom aren’t always likable or generous, but all of whom are vividly alive.” —Entropy Magazine

“An up-close, unflinching portrait…It is refreshing to read a novel that illustrates the harrowing choices transgender people face alongside hope.” —Harvard Review

“A quietly forceful debut…Shot through with melancholy while capturing the bliss of discovering one’s sexual self.” ­—Kirkus