The Hidden Letters of Velta B. (Hardcover) 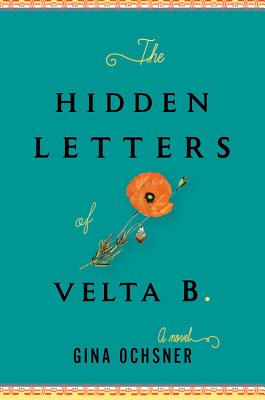 This beautifully written book is a multi-generational epic. It's full of Latvian folklore, magical thinking, eels and plenty of heartbreak. It's set in the modern era but has the feel of a lost folktale. Ochsner is an Oregon native, but she spent years traveling to and from Latvia to get this story just right.

From a critically acclaimed fiction writer comes the moving story of a boy with extraordinary ears who — with the help of a cache of his great-grandmother’s letters — brings healing to a town burdened by the sins of its past.

Young Maris has been summoned to his mother’s bedside as she nears the end of her life; she feels she must tell him her version of their family history, the story of his early life, and the ways in which he changed the lives of others. Maris was born with what some might call a blessing and others might deem a curse: his very large, very special ears enable him to hear the secrets of the dead, as well as the memories that haunt his Latvian hometown. Nestled in the woodlands on the banks of the Aiviekste River, their town suffered the ravages of war, then the cold shock of independence. As a boy, Maris found himself heir to an odd assortment of hidden letters; a school project provided the chance to share them, forcing the town to hear the truth from the past and face what it meant for their future.
With "luminous writing [and] affection for her characters" (New York Times), Gina Ochsner creates an intimate, hopeful portrait of a fascinating town in all its complications and charm. She shows us how, despite years of distrust, a community can come through love and loss to the joy of understanding — enabled by a great-grandmother’s legacy, a flood, and a boy with very special ears.

GINA OCHSNER is the author of two collections of short stories, People I Wanted to Be and The Necessary Grace to Fall, both of which won the Oregon Book Award, and a novel, The Russian Dreambook of Color and Flight, which was long-listed for the Orange Prize. Her work has appeared in The New Yorker and The Best American Nonrequired Reading. She is a recipient of the Flannery O’Connor Award, the William Faulkner Prize, an NEA grant, a Guggenheim, and the Raymond Carver Prize. She lives in Oregon.

FINALIST FOR THE OREGON BOOK AWARDS—KEN KESEY AWARD FOR FICTION

"In Ochsner's...strange, vivid second novel, a woman in a tiny Latvian village traces the magic-infused story of her life...Through bizarre, often hilarious vignettes featuring a cast of colorful characters and slapstick moments, Inara’s tale comes to light… Ochsner has created an entire town filled with characters who display eccentric habits and engage in sharp-tongued banter, bringing a touch of believability to even the book’s most out-there anecdotes. Humor, mythology, and an immersive setting, as well as a few poignant and visceral moments as family secrets are revealed, render this a memorable tale.”—Publishers Weekly

"For readers who love historical fiction and magical realism, The Hidden Letters of Velta B. is a gift on par with Joanne Harris's Chocolat...Quirky, ethereal, hilarious and sorrowful, Ochsner's intimate portrait of a group of people who must survive with each other's help, whether they like it or not, perfectly highlights the connections between the everyday and the transcendental elements of being human."—Shelf Awareness

“A beautiful, tragic and mesmerizing account of a fascinating place and people.”—Eleven PDX Magazine

“A captivating novel of secrets, love, and memory, The Hidden Letters of Velta B. revels in the tragicomedy that is life itself, binding the poignancy of human dreams to accidents of circumstance. Ochsner weaves magic from muddy roads and financially strapped dreamers, plotters, eccentrics, gypsies, failed dancers, chessmasters and philosophers-- who, despite cell phones and bus service, could have lived in eons past. When an outsider threatens to move the town’s cemetery, the excavation becomes the perfect metaphor of buried memories in a history-haunted land. This terrific novel knocked me out.” – Janet Fitch, author of Paint It Black and White Oleandar

“In Gina Ochsner's extraordinary feat of storytelling, a dying mother seeks to armor her son with the power of myth and the strength of family history.  The stories she tells are as rich as roasted eel from the river, but the ugly truth of their Latvian town's history keeps poking through like rocks in the hard cemetery ground. A spellbinding novel as tough as it is beautiful.” – Helen Simonson,  author of Major Pettigrew’s Last Stand

"I haven't read anything quite like The Hidden Letters of Velta B. in a very long time. It reminded me that sometimes I can read the same type of novel over and over almost as if they are comforting meditations on people, places, and things. I get in a rut, and start to get restless with my reading choices.  Gina Ochsner stepped in at the right time and delivered a story that is full of folk tales, post-Soviet struggles, family secrets, and a young boy with ears that can hear the dead muttering in their graves...If you are a fan of novels set in post-Soviet Union Eastern Europe; of fairy tales and folk tales; of families, love, and regret, you will certainly want to read this wonderful novel.  It is at times both funny with a gentle humor, and so sad it creates a pang in your heart. I enjoyed the family dynamics, the struggle to keep cultural stories alive to pass down to the next generation, and most of all, I loved Inara.  She was a fully fleshed out character that kept me turning the pages."—Bookalicious Babe Book Reviews