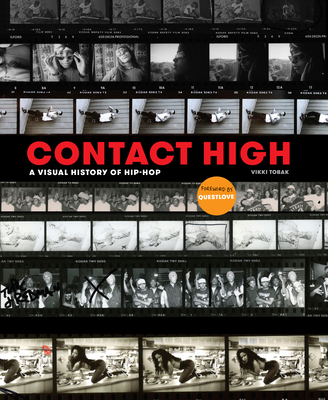 
The perfect gift for music and photography fans, an inside look at the work of hip-hop photographers told through their most intimate diaries—their contact sheets.

Featuring rare outtakes from over 100 photoshoots alongside interviews and essays from industry legends, Contact High: A Visual History of Hip-Hop takes readers on a chronological journey from old-school to alternative hip-hop and from analog to digital photography. The ultimate companion for music and photography enthusiasts, Contact High is the definitive history of hip-hop’s early days, celebrating the artists that shaped the iconic album covers, t-shirts and posters beloved by hip-hop fans today.

VIKKI TOBAK is a journalist whose writing has appeared in The FADER, Complex, Mass Appeal, Paper Magazine, i-D Magazine, The Detroit News, Vibe, and many others. She is a former producer and columnist for CBS Marketwatch, CNN, Bloomberg News, TechTV and other leading media organizations. Vikki is also the founding curator of FotoDC's film program, and served as the art commissioner/curator for the Palo Alto Public Art Commission in Silicon Valley. She has lectured about music photography at American University, VOLTA New York, Photoville, the Library of Congress and the Museum of Contemporary Art Detroit.

"Vikki Tobak has put together narratives told by the very image makers who helped shape the culture, discovering fascinating stories and lessons on those sheets." — The New York Times

"...[A] wondrous tribute to the way hip-hop overturned not just the sound of culture but also ways of seeing...Contact High provides a fascinating prehistory of our present, a glimpse into a time when nobody quite knew where hip-hop could go." — The New Yorker

"Tobak’s best contribution isn’t just in the wealth of new images she offers but also in the simple act of assigning names to them. As MC Shan once rapped about his producer and DJ, Marley Marl: 'I’m gonna give the man behind the wheels some credit.' With Contact High, Tobak insists we extend the women and men behind the camera the same gratitude." — The Los Angeles Times

"Writer Vikki Tobak delivers a coffee table book for the ages, a feast of words and iconic hip-hop portraits spanning four decades...[Contact High] is not only a trip down memory lane, but a testament to the enduring power of hip-hop, a culture that's constantly growing, constantly changing and continues to inform the world we live in." — NPR

"[Contact High's] collection of contact sheets reveals the care and consideration photographers put into each frame, the unavoidable mistakes they made and how they coaxed a public persona from a private person." — The Washington Post

"A vivid timeline of a most American phenomenon." — CNN

"[A] unique perspective on the charisma, style, and swagger of some of the greatest rappers to ever spit verse." — Buzzfeed

"Contact High is an irresistible showcase for rap’s brightest stars, and a deeply considered meditation on the power of media in hip-hop culture." — Pitchfork

"[Contact High] is a clever and multidimensional look at history, with images once relegated to the cutting room floor adding color and context to just how superstars — and the stories about them — were made." — The Fader

"Contact High celebrates the off beat moments of hip hop history—the quiet moments captured in a contact sheet, for instance, rather than the endlessly looped and meme moments we all know by heart." — PAPER

"Hip hop heads, film photographers, and music lovers will rejoice over this one." — Popular Photography

"[Contact High] is a visual homage to rap’s legend-making stamp on society... To be frank, it’s a read all rap-philes need to add to their reading lists." — Cools.com