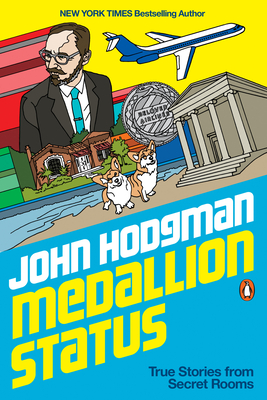 “[An] affecting and hilarious meditation on fame and prestige as seen through the lens of an airline loyalty program.” —The AV Club

A hilarious and honest new book in which John Hodgman, New York Times bestselling author of Vacationland, leaves vacation behind and gets back to work as a still somewhat famous person . . . and then loses his job. An uproarious read.

After spending most of his twenties pursuing a career as a literary agent, John Hodgman decided to try his own hand at writing. Following an appearance to promote one of his books on The Daily Show, he was invited to return as a contributor. This led to an unexpected and, frankly, implausible career in front of the camera that has lasted to this very day, or at least until 2016.

In these pages, Hodgman explores the strangeness of his career, speaking plainly of fame, especially at the weird, marginal level he enjoyed it. Through these stories you will learn many things that only John Hodgman knows, such as how to prepare for a nude scene with an oboe, or what it feels like to go to a Hollywood party and realize that you are not nearly as famous as the Property Brothers, or, for that matter, those two famous corgis from Instagram. And there are stories about how, when your television gig is canceled, you can console yourself with the fact that all of that travel that made your young son so sad at least left you with a prize: platinum medallion status with your airline.

Both unflinchingly funny and deeply heartfelt, Medallion Status is a thoughtful examination of status, fame, and identity--and about the way we all deal with those moments when we realize we aren't platinum status anymore and will have to get comfortable in that middle seat again.

John Hodgman is a writer, comedian, and actor. He is the author of The Areas of My Expertise, More Information Than You Require, That Is All, and Vacationland. He is the host of the popular Judge John Hodgman podcast and also contributes a weekly column under the same name for The New York Times Magazine.

An AV Club “5 Books to Read in October”

“Conversational, funny . . . the focus is on the bizarre state of being liminally famous in a culture that so desperately celebrates fame. . . . Hodgman has dozens of funny stories to tell, ranging from recollections of early jobs to the time Benedict Cumberbatch messed with his mind.”
—The AV Club

“Very, very funny . . . Hodgman's Medallion Status is the opposite of narcissism: it's an honest and terribly funny peek into a world that very few of us will get to see, one that is frank enough to admit that the only thing the people in that world enjoy about it is that we're not allowed in it.”
—Cory Doctorow, Boing Boing

“Hodgman offers thoughtful musings about human nature and our drive for status. An entertaining and endearing entry from the author of Vacationland.”
—Booklist