Antisocial: Online Extremists, Techno-Utopians, and the Hijacking of the American Conversation (Hardcover) 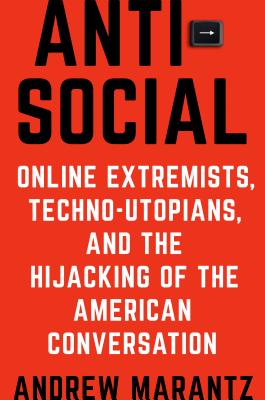 By Andrew Marantz
$28.00
Unavailable at this time.

From a rising star at The New Yorker, a deeply immersive chronicle of how the optimistic entrepreneurs of Silicon Valley set out to create a free and democratic internet--and how the cynical propagandists of the alt-right exploited that freedom to propel the extreme into the mainstream.

For several years, Andrew Marantz, a New Yorker staff writer, has been embedded in two worlds. The first is the world of social-media entrepreneurs, who, acting out of naïvete and reckless ambition, upended all traditional means of receiving and transmitting information. The second is the world of the people he calls "the gate crashers"--the conspiracists, white supremacists, and nihilist trolls who have become experts at using social media to advance their corrosive agenda. Antisocial ranges broadly--from the first mass-printed books to the trending hashtags of the present; from secret gatherings of neo-Fascists to the White House press briefing room--and traces how the unthinkable becomes thinkable, and then how it becomes reality. Combining the keen narrative detail of Bill Buford's Among the Thugs and the sweep of George Packer's The Unwinding, Antisocial reveals how the boundaries between technology, media, and politics have been erased, resulting in a deeply broken informational landscape--the landscape in which we all now live. Marantz shows how alienated young people are led down the rabbit hole of online radicalization, and how fringe ideas spread--from anonymous corners of social media to cable TV to the President's Twitter feed. Marantz also sits with the creators of social media as they start to reckon with the forces they've unleashed. Will they be able to solve the communication crisis they helped bring about, or are their interventions too little too late?

Andrew Marantz is a staff writer at The New Yorker, where he has worked since 2011. His work has also appeared in Harper's, New York, Mother Jones, the New York Times, and many other publications. A contributor to Radiolab and The New Yorker Radio Hour, he has spoken at TED and has been interviewed on CNN, MSNBC, NPR, and many other outlets.

“Antisocial is . . . Marantz’s searching attempt to understand people he describes as truly deplorable without letting his moral compass get wrecked. . . . [Antisocial] is trenchant and intelligent; wry but not glib; humane but never indulgent."
—Jennifer Szalai, The New York Times

“Imagine a world bereft of gates and uncrossable lines, with no discernable rules. That’s the Hadean landscape that has been painted expertly, in dark hues, by Andrew Marantz in his book Antisocial.”
—Kara Swisher, The New York Times Book Review

“By turns amusing and alarming. . . . Like an old Hunter S. Thompson report from the campaign trail, Antisocial is an entertaining read about a distressing subject.”
—San Francisco Chronicle

“Antisocial is an engrossing work of literary journalism. . . . A genuine first of its kind: ambitious, attuned to the novel features of social media, and written with enough detail and perspective to survey the subtle grain of a multifaceted movement. . . . Marantz is a master of this beat, and he excels at unwinding the subtle ironies, personal tics, and moments of vulnerability that reveal his subjects. . . . Antisocial is an engaging, relentlessly detailed, and observant study of the characters and personal motivations at play in the far right’s information pipeline.”
—The Nation

"Marantz is a keen and witty observer of the spectacle, attuned to the tension between his desire to expose figures who are ‘helping the lunatic fringe become the lunatic mainstream’ and his knowledge that the act of exposing them grants those people’s own wish for mainstream attention.”
—New York Review of Books

“Antisocial by Andrew Marantz is so humane and lucid and absorbing and good!! Everything in it is a nightmare and I couldn’t put it down.”
—Jia Tolentino, via Twitter

“A searching study of the right-wing gate-crashers who have overwhelmed social media in the Trump era. . . . Marantz’s travels into the camps of those right-wingers prove [Richard] Rorty correct, and the author clearly documents their use of social media to advance right-wing causes. . . . Invaluable political reportage in a time of crisis."
—Kirkus Reviews (starred review)

“Marantz, a staff writer at the New Yorker, makes a timely and excellent debut. . . . Marantz doesn’t shy away from asking pointed questions or noting his subjects’ inconsistencies. This insightful and well-crafted book is a must-read account of how quickly the ideas of what’s acceptable public discourse can shift.”
—Publishers Weekly (starred review)

“[A] breathtaking, page-turning foray into the clash between Silicon Valley entrepreneurs and online extremists. . . . Marantz’s narrative is like going along for the ride in a foreign landscape, bouncing into the unknown on a bumpy road. . . . Marantz has a keen eye for character. . . . His intentions are serious, and ultimately Antisocial is an insightful look at two powerful forces shaping American society. . . . Whether you use social media or not, Antisocial is an important look at groups that are molding the nation.”
—BookPage

“Antisocial is at once funny and scary, antic and illuminating. It's a must-read for anyone still struggling to understand the last election or hoping to make sense of the next one.”
—Elizabeth Kolbert, Pulitzer Prize-winning author of The Sixth Extinction

“Anyone who wants to know how Silicon Valley's dream turned into democracy's nightmare should read Antisocial, Andrew Marantz's fascinating firsthand exploration of the trolls and nihilists who have hijacked the internet. This book puts contemporary politics in an alarming new light.”
—Jane Mayer, author of Dark Money

“A riveting exploration of the causes and consequences of our current societal nervous breakdown. Antisocial is absolutely essential reading to understand this moment, and it will stick in your brain long after you’ve devoured it.”
—Chris Hayes, author of A Colony in a Nation and host of All In with Chris Hayes

“We live in an era when current events are driven as much by scrolls of binary code as they are by matters in the physical world. With Antisocial, Andrew Marantz has crafted a map of this digital landscape, charted how it came to be, and pointed to its implications for all of us. This is an important book whose relevance will only grow over time.”
—Jelani Cobb, Ira A. Lipman Professor of Journalism at Columbia University and author of The Substance of Hope

“Antisocial is a close-up portrait of the new species of online shock artists who have taken over the American conversation.  It is the most detailed and concrete account of how our politics have been changed by social media. This book is essential reading.”
—Jaron Lanier, interdisciplinary scientist at Microsoft Research and author of You Are Not a Gadget

“Marantz has produced an essential work of reporting—one that illuminates not only how our information landscape emerged, but also how it has become so corrupted and dangerous. If you want to comprehend the world in which we live, Antisocial is a book you must read.”
—David Grann, author of Killers of the Flower Moon

“Nowhere is the propagation of racist ideas more apparent today than on the social media platforms Silicon Valley created—but failed to govern. In Antisocial, Andrew Marantz crafted a complex, unsettling portrait of how blind techno-utopianism can lead to disaster. This is necessary reading if we intend to keep the next generation of social networks from becoming yet another American source of oppression.”
—Ibram X. Kendi, National Book Award-winning author of Stamped from the Beginning and How to Be an Antiracist

“This is a book about how the unthinkable becomes thinkable: how, in the Age of Trump, the alt-right, and outright fascists, have come to claim a central place in American discourse. This book scared the hell out of me, but every American could benefit from reading it. Andrew Marantz has written a chilling, deeply sourced, rivetingly told account of how a few fringe figures saw the potential of the internet as a vehicle for mass disinformation, and became prophets of the new fascism. Antisocial is political reporting at its finest.”
—Suketu Mehta, author of This Land Is Our Land