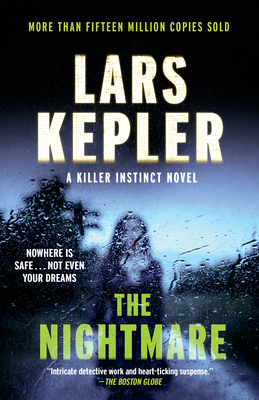 This is book number 2 in the Joona Linna series.

The second book in the #1 internationally bestselling Joona Linna series, The Nightmare finds Joona teaming up with a national security agent to find the link between two mysterious, seemingly unrelated deaths.

One summer night, police discover the lifeless body of a young woman on an abandoned yacht. She appears to have drowned, but it's clear she was never in the water. The next day, a man is found hanging in his completely empty apartment. It seems like a suicide, but the circumstances are suspicious.

Detective Joona Linna is called in to investigate, and, with the help of a young Swedish Security Police detective named Saga Bauer, he soon discovers a surprising connection between the two deaths. With more lives at stake, Joona and Saga must fight to stop a killer who always seems to be one step ahead. Ultimately the case will lead them into the shadowy world of international arms trafficking, where they are forced to confront a ruthless psychopath.

LARS KEPLER is the pseudonym of the critically acclaimed husband and wife team Alexandra Coelho Ahndoril and Alexander Ahndoril. Their number one internationally bestselling Joona Linna series has sold more than twelve million copies in forty languages. The Ahndorils were both established writers before they adopted the pen name Lars Kepler, and have each published several acclaimed novels. They live in Stockholm, Sweden. Translated by Neil Smith (acclaimed translator of Jo Nesbø).

Praise for The Nightmare and Lars Kepler's Joona Linna Series:

"Gripping. . . . Kepler will have you turning pages long after your bedtime." —The Philadelphia Inquirer