The Spy: A Novel of Mata Hari (Vintage International) (Paperback) 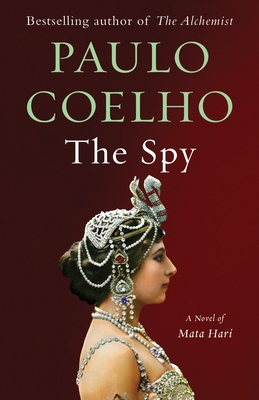 None of the connections Mata Hari made with men of wealth and importance saved her from the French firing squad on October 15, 1917. Until her last hour, she believed that her charm and personal favors would dispel the espionage charges, that her innocence would prevail. Although the prosecutor hand no evidence, no case, this exotic dancer and world famous beauty had discredited herself with the public. Coelho's brilliant account of a fiercely independent woman of history, Mata Hari, illuminates and adventurous life during dark times.

In his new novel, Paulo Coelho, bestselling author of The Alchemist and Adultery, brings to life one of history's most enigmatic women: Mata Hari.

HER ONLY CRIME WAS TO BE AN INDEPENDENT WOMAN

When Mata Hari arrived in Paris she was penniless.  Within months she was the most celebrated woman in the city.

As a dancer, she shocked and delighted audiences; as a courtesan, she bewitched the era’s richest and most powerful men.

But as paranoia consumed a country at war, Mata Hari’s lifestyle brought her under suspicion. In 1917, she was arrested in her hotel room on the Champs Elysees, and accused of espionage.

Told in Mata Hari’s voice through her final letter, The Spy is the unforgettable story of a woman who dared to defy convention and who paid the ultimate price.

PAULO COELHO is the author of many international best sellers, including The Alchemist, Eleven Minutes, The Pilgrimage, The Fifth Mountain, and Adultery, among others. He has been a member of the Academy of Letters of Brazil since 2002 and in 2007 was named a Messenger of Peace by the United Nations. In 2003, he received the Guinness World Record for most translations of a single title (The Alchemist) signed by the author in one sitting and several years later, in 2009, he received a new Guinness World Record for most translated author for the same book (also for The Alchemist).

Paulo Coelho’s books have been translated into 88 languages and have sold more than 320 million copies in more than 170 countries. His novel, The Alchemist, one of the most influential books of all time, has sold more than 85 million copies and has been cited as an inspiration by people as diverse as Malala Yousafzai and Pharrell Williams. He has received numerous prestigious international awards, including the Hans Christian Andersen Award and the Chevalier de l’Ordre National de la Légion d’Honneur, to name a few.

Praise for Paulo Coelho and The Spy

“[The Spy is a] masterful new novel.” --Bookpage

“Coelho, whose books have sold more than 200 million copies worldwide, has taken the Mata Hara story and fashioned it into a short dynamo of a novel.” --Los Angeles Times

“Coelho has created a portrait of an anachronistic woman, who was destroyed by her times and became a legend.” --Paste Magazine

“A novelist who writes in a universal language.” --The New York Times

“Spiritualists and wanderlusts will eagerly devour . . . [Coelho’s] search for all things meaningful.” --The Washington Post