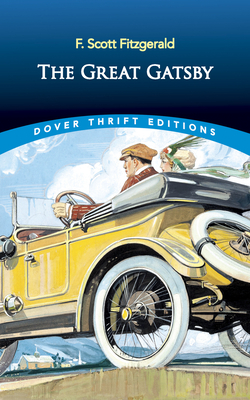 By F. Scott Fitzgerald
$8.00
On our shelves now at one or more of our stores

"One of the most important works in American literature -- and, to many, the great American novel." -- Time. "I want to write something new, " F. Scott Fitzgerald told his editor, Maxwell Perkins, "something extraordinary and beautiful and simple and intricately patterned." A century later, Fitzgerald's little book of big ideas retains its freshness and excitement. The quintessential portrait of Jazz Age America, it reflects the era's postwar exuberance as well as the corruption and immorality lurking behind the glamour of wild parties, dancing, and illegal drinking.
Narrator Nick Carraway -- a transplant from the Midwest like Fitzgerald himself -- observes the wasteful lives of his well-to-do neighbors in this tale of money, love, and the pursuit of the American dream. The unforgettable cast is headed by Jay Gatsby, a self-made man whose determination to realize his fantasies embodies both the glories of imagination and the grimness of reality. Above all, The Great Gatsby is animated by the magic of Fitzgerald's incandescent prose and its timeless exploration of the importance of honesty, the temptations of wealth, and the struggle to escape the past.

One of the great American writers of the 20th century whose works enjoy popular appeal as well as critical acclaim, F. Scott Fitzgerald is best known for his novel The Great Gatsby. His brilliant tales of the rich and glamorous defined the 1920s American era now known as the Jazz Age.