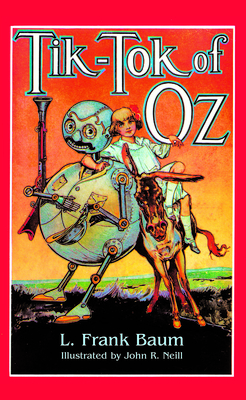 In this delightful fantasy, we meet Queen Ann Soforth of Oogaboo and her army -- sixteen officers and one private soldier -- who set out to conquer the world. What follows is a series of exotic adventures in which the Shaggy Man attempts to find his long-lost brother, held captive by the Nome King. Tik-Tok, a curious mechanical man, agrees to assist Shaggy in his search, and Polychrome stops to play and suffers the awful fate of being deserted by her rainbow. You'll also meet Betsy Bobbin and Hank, a mule.
Eventually, everyone comes together in the expedition to help Shaggy locate his misplaced sibling. Before they can do that, however, they must first overcome the Nome King, a tricky bit of business with many pitfalls. The Nome King's magic proves especially troubling. Thanks to some timely assistance from a quizzical character named Quox, the Nome King is defeated. After many diverting escapades, Shaggy's brother is found and the expedition arrives before the gates of the Emerald City. "Oz" lovers of all ages will delight in this charming flight of fancy, embellished with 93 illustrations by John R. Neill.

Best known as the author of the Wizard of Oz stories, L. Frank Baum (1856-1919) wrote many other fantasy novels, in addition to poems, short stories, and scripts for stage and screen.