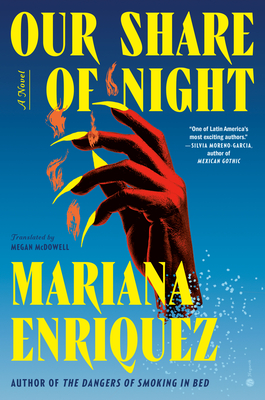 I just love this woman. Enriquez has a signature scent to her writing, one that conjured up images of bone shards and blood mingled with mud. This table-shaking tome offers up so much: Argentinian mysticism, the (literal) cult of family, political trauma, queer experiences and an attempt to escape the tugs of fate. An enriching and grisly read.

“A vibrantly translated epic of family and mystery, friendship and sexual awakenings, history and monsters, full of images I won’t forget: golden nails on a clawed hand, a boy watching two men embrace, and the scariest door-close ever.”
— Drew Broussard, The Golden Notebook, Woodstock, NY

A woman’s mysterious death puts her husband and son on a collision course with her demonic family in the first novel to be translated into English by the International Booker Prize–shortlisted author of The Dangers of Smoking in Bed—“the most exciting discovery I’ve made in fiction for some time” (Kazuo Ishiguro).

A young father and son set out on a road trip, devastated by the death of the wife and mother they both loved. United in grief, the pair travel to her ancestral home, where they must confront the terrifying legacy she has bequeathed: a family called the Order that commits unspeakable acts in search of immortality.

For Gaspar, the son, this maniacal cult is his destiny. As the Order tries to pull him into their evil, he and his father take flight, attempting to outrun a powerful clan that will do anything to ensure its own survival. But how far will Gaspar’s father go to protect his child? And can anyone escape their fate?

Moving back and forth in time, from London in the swinging 1960s to the brutal years of Argentina’s military dictatorship and its turbulent aftermath, Our Share of Night is a novel like no other: a family story, a ghost story, a story of the occult and the supernatural, a book about the complexities of love and longing with queer subplots and themes. This is the masterwork of one of Latin America’s most original novelists, “a mesmerizing writer,” says Dave Eggers, “who demands to be read.”

Mariana Enriquez is a writer and editor based in Buenos Aires. She has published two story collections in English, Things We Lost in the Fire and The Dangers of Smoking in Bed, which was a finalist for the International Booker Prize, the Kirkus Prize, the Ray Bradbury Prize for Science Fiction, Fantasy & Speculative Fiction, and the Los Angeles Times Book Prize in Fiction.

Megan McDowell has translated many of the most important Latin American writers working today. Her translations have won the National Book Award for Translated Literature, the English PEN award, the Premio Valle-Inclán, and two O. Henry Prizes, and have been nominated for the International Booker Prize (four times) and the Kirkus Prize. Her short story translations have been featured in The New Yorker, The Paris Review, The New York Times Magazine, Tin House, McSweeney’s, and Granta, among others. In 2020 she won an Award in Literature from the American Academy of Arts and Letters. She is from Richmond, Kentucky, and lives in Santiago, Chile.

“An ailing medium who can connect with the dead tries to protect his son from an insatiable darkness. . . . Monumental.”—The New York Times

​“A legendary Latine horror reminiscent of The Shining.”—BuzzFeed

“Conjure[s] emotional textures almost unimaginable in realist fiction . . . With this [novel], Enriquez has added an indelible and terrifying corner to our reality.”—Bookforum

“Wicked, wise, and stuffed with supernatural intrigue, Our Share of Night is a mighty feat of creative prowess.”—Elle

“[Our Share of Night] blends the sweep and politics of Namwali Serpell’s The Old Drift with the dystopian dread of Cormac McCarthy’s The Road.”—Oprah Quarterly

“Our Share of Night . . . artfully employing the vocabulary of supernatural horror as the one voice capable of articulating Argentina’s unspeakable history. With realism in its magic and magic in its realism, this is a magnificent accomplishment and a genuine work of power.”—Alan Moore, author of Watchmen and V for Vendetta

“Reader, beware! Our Share of Night is a novel so disquieting, so unsettling that I could neither put it down nor read it late at night. Mariana Enriquez’s short stories had already made me a fan for life—her novel is going to haunt me for the rest of my life.”—Kelly Link, author of White Cat, Black Dog and Get in Trouble, finalist for the Pulitzer Prize

“A singular, soul-rattling novel with urgent moral questions about greed, injustice, and inheritance at its core . . . I’ve never read anything like it, and I’ll never forget my time in Enriquez’s mesmerizing world.”—Jessamine Chan, New York Times bestselling author of The School for Good Mothers

“I was positively bewitched by Our Share of Night. Towering, electric, wild—this novel is a masterpiece and a true original.”—Laura van den Berg, bestselling author of The Third Hotel

“One of the best novels of the twenty-first century . . . I’m going to press this book into the hands of everyone I know and dare them to open the door to its Other Place.”—Paul Tremblay, bestselling author of A Head Full of Ghosts and The Pallbearers Club

“Mariana Enriquez is a visionary. She conjures a brutal, voluptuous world where nothing is as it appears. I’m still looking over my shoulder.”—Jennifer Haigh, bestselling author of Mercy Street

“Mariana Enriquez is a masterful world-builder. And the one she creates here devastates. This engrossing mixture of supernatural horror and intimate storytelling will leave an indelible but instructive mark on readers.”—Sergio de la Pava, author of A Naked Singularity, winner of the PEN/Robert W. Bingham Prize

“Our Share of Night is the kind of big book in which the reader becomes immersed, absorbed in the lives of its characters and their intertwined histories. Thrilling and engaging, it is a staggering accomplishment. Mariana Enriquez has written the novel that other novels will be compared to.”—John Langan, author of The Fisherman, winner of the Bram Stoker Award