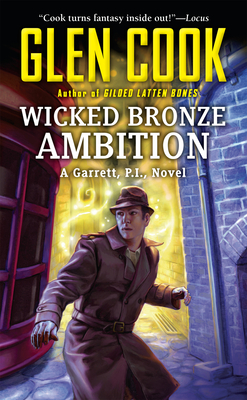 By Glen Cook
$8.99
Unavailable at this time.

This is book number 14 in the Garrett, P.I. series.

Garrett is a human detective in the fantastical city of TunFaire. And now he’s getting tangled up in the worst sort of laws...

Garrett is set to stow his wandering heart with his fiancée, Strafa Algarda. But for Garrett, even true love comes with its share of headaches—namely, the Algarda family.

Strafa’s family needs Garrett’s unique skills in the worst way. Rumors are spreading that someone is organizing a Tournament of Swords—a brutal contest that magically compels the children of sorcerers to battle until only one is left alive. The winner will absorb the power from those he has killed and thus become a demigod.

Strafa and her family want to protect her daughter, Kevans, from being forced to take part in the lethal contest...and they’ve asked Garrett to find out who is organizing the tournament and nip it in the bud. The only problem is that finding the culprit is most likely impossible. But the Algardas are used to getting what they want....

Praise for the Garrett, P.I., Series

“Fantasy noir at its best.”—Library Journal