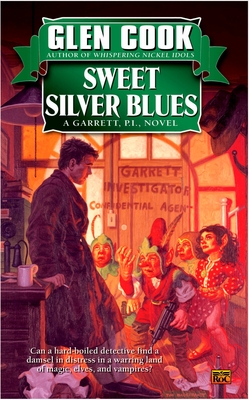 This is book number 1 in the Garrett, P.I. series.

It should have been a simple job. But for Garrett, a human detective in a world of gnomes, tracking down the woman to whom his dead pal Danny left a fortune in silver is no slight task. Even with the aid of Morley, the toughest half-elf around, Garrett isn't sure he'll make it out alive from a land where magic can be murder, the dead still talk, and vampires are always hungry for human blood.

Cook turns fantasy inside out. (Locus)