The Golden Tresses of the Dead: A Flavia de Luce Novel (CD-Audio) 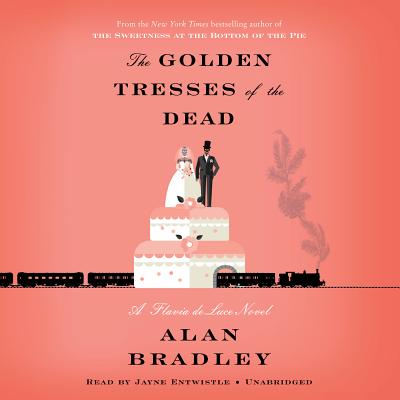 This is book number 10 in the Flavia de Luce series.

NEW YORK TIMES BESTSELLER • A finger in a wedding cake is only the beginning in this deliciously shocking mystery featuring Flavia de Luce, “the world’s greatest adolescent British chemist/busybody/sleuth” (The Seattle Times).

Although it is autumn in the small English town of Bishop’s Lacey, the chapel is decked with exotic flowers. Yes, Flavia de Luce’s sister Ophelia is at last getting hitched, like a mule to a wagon. “A church is a wonderful place for a wedding,” muses Flavia, “surrounded as it is by the legions of the dead, whose listening bones bear silent witness to every promise made at the altar.” Flavia is not your normal twelve-year-old girl. An expert in the chemical nature of poisons, she has solved many mysteries, sharpening her considerable detection skills to the point where she had little choice but to turn professional. So Flavia and dependable Dogger, estate gardener and sounding board extraordinaire, set up shop at the once-grand mansion of Buckshaw, eager to serve—not so simple an endeavor with her odious little moon-faced cousin, Undine, constantly underfoot. But Flavia and Dogger persevere. Little does she know that their first case will be extremely close to home, beginning with an unwelcome discovery in Ophelia’s wedding cake: a human finger.

Praise for The Golden Tresses of the Dead

“Delightful . . . The mysteries in Mr. Bradley’s books are engaging, but the real lure is Ms. de Luce, the irreverent youngster.”—The Wall Street Journal

“A ghoulish question is at the heart of Bradley’s excellent tenth Flavia de Luce novel. . . . Bradley, who has few peers at combining fair-play clueing with humor and has fun mocking genre conventions, shows no sign of running out of ideas.”—Publishers Weekly (starred review)

Alan Bradley is the New York Times bestselling author of many short stories, children’s stories, newspaper columns, and the memoir The Shoebox Bible. His first Flavia de Luce novel, The Sweetness at the Bottom of the Pie, received the Crime Writers’ Association Debut Dagger Award, the Dilys Winn Award, the Arthur Ellis Award, the Agatha Award, the Macavity Award, and the Barry Award, and was nominated for the Anthony Award. His other Flavia de Luce novels are The Weed That Strings the Hangman’s Bag, A Red Herring Without Mustard, I Am Half-Sick of Shadows, Speaking from Among the Bones, The Dead in Their Vaulted Arches, As Chimney Sweepers Come to Dust, and Thrice the Brinded Cat Hath Mew’d, as well as the ebook short story “The Curious Case of the Copper Corpse.”

Jayne Entwistle is an award-winning audiobook narrator known most notably for her narration of the Flavia De Luce series by Alan Bradley. She received the prestigious Odyssey Award for The War That Saved My Life by Kimberly Brubaker Bradley and the Odyssey Honor Award for The Scandalous Sisterhood of Prickwillow Place by Julie Berry. In addition to several Earphones Awards, AudioFile magazine has included her narration on their list of Best Audiobooks of the Year. When not immersed in fabulous books, Jayne can be found on-screen in television shows such as The Good Place, Feud: Bette and Joan, You're the Worst, and Maron. Originally from the North of England, Jayne currently lives in Los Angeles.

“Flavia’s over-the-top use of alliteration . . . and proudly precocious, sesquipedalian vocabulary . . . along with the thoroughly endearing cast of characters, make this series’ tenth installment a laugh-out-loud winner.”—Booklist (starred review)

“Flavia de Luce hasn’t lost a sister, she’s gained a case—and what a case. . . . Perhaps the most consistently hilarious adventure of the alarmingly precocious heroine.”—Kirkus Reviews

“If ever there were a sleuth who’s bold, brilliant, and, yes, adorable, it’s Flavia de Luce.”—USA Today

“Delightful . . . a combination of Eloise and Sherlock Holmes.”—The Boston Globe

“[Flavia] is as addictive as dark chocolate.”—Daily Mail