Done for a Dime: A Novel (Paperback) 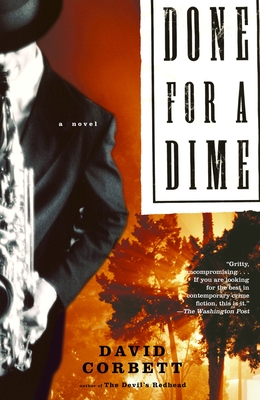 Raymond “Strong” Carlisle made his mark as an ace sideman to the biggest names in R&B. Now he lies in the mud outside his home, shot dead from behind. He’s the first official casualty in a dirty war for control of Rio Mirada: a low-rent “city in transition” at the northernmost point of the San Francisco Bay, beset by drug dealers, arsonists, squatters, and restless developers. And now a murderer.

In Rio Mirada, the truth is in short supply. What’s plentiful are people with all the reasons in the world to make sure the murder of Strong Carlisle remains unsolved. And the harder Detective Dennis Murchison pushes for answers, the clearer it becomes that this single, brutal homicide is just the tip of an iceberg in a town where small-time crime and big-time corruption are about to collide with explosive consequences.

David Corbett is also the author of Done for a Dime. For nearly fifteen years he was a senior operative with a prominent San Francisco private investigation firm, working on a number of high-profile criminal and civil litigations, including the Lincoln Savings & Loan scandal and the People’s Temple trial. After that, he worked with his late wife Terri in a small law practice in northern California, where he continues to reside.

“Gritty, uncompromising . . . If you are looking for the best in contemporary crime fiction, this is it.”
—The Washington Post

“DAZZLING . . . The beauty of Corbett’s seductive style [is that] for all the lyricism of his narration and all the compassion he shows his characters, he never strays too far from the blunt vigor of California noir.”
—The New York Times Book Review

“Done for a Dime starts out sharp and never loses its edge as the action becomes more intense. Corbett doesn’t blow a wrong note in what is one of the best police novels of the year. Each character who marches through these pages is believable and fascinating. Corbett’s knowledge of police and the murky world they inhabit make this story a find. I won’t want to miss his upcoming books.”
—Rocky Mountain News

“[Done for a Dime] should put David Corbett into the front rank of American crime writing. . . . At once staccato and melodic, it’s tough as hell without sacrificing the tenderness that was at the heart of [his] first book.”
—SCOTT PHILLIPS
Author of The Ice Harvest and Cottonwood

“Some writers put all they have into their first novel and can never equal it. Others, gaining confidence the second time out, spread their wings and soar to unexpected heights. David Corbett is among the lucky ones. . . . The brilliance of Done for a Dime . . . announces an important new voice in crime fiction.”
—The Washington Post

“David Corbett [is] a soulful storyteller. . . . Here’s a man . . . daring to deepen and enrich the genre. Done for a Dime is shot through with a quality rare to crime fiction—compassion.”
—EDDIE MULLER
Author of The Distance and
The Art of Noir: The Posters and Graphics
from the Classic Era of Film Noir

“The scruffy, lively, multiracial town is as much a major character in [Done for a Dime] as the people who live, work, cheat and murder each other in various ways on its streets.”
—Chicago Tribune

“One of the best things that can happen to bibliophiles is to discover an author they’ve never heard of, but whose books will now be on their list of must-reads. David Corbett’s books will forever be on my list. . . . Done for a Dime starts out sharp and never loses its edge as the action becomes more intense. Corbett doesn’t blow a wrong note in what is one of the best police novels of the year. Each character who marches through these pages is believable and fascinating. Corbett’s knowledge of police and the murky world they inhabit make this story a find. I won’t want to miss his coming books.”
—Rocky Mountain News