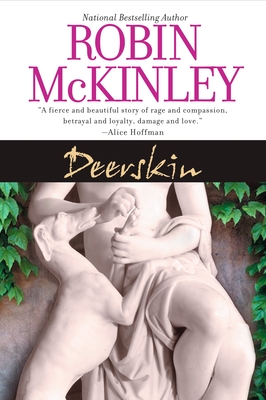 By Robin McKinley
$16.00
Unavailable at this time.

A wiser woman than I once wrote that "Robin McKinley's whole career is telling fairytales as if they happened to real people and had consequences".

In Deerskin, her devastating retelling of the French fairytale Donkeyskin Girl, McKinley does not pull any punches. This is a gut wrenching novel to read, and I cannot recommend it enough. The slow, ominous build up of nauseous recognition that presages the initial (and most brutal) act of violence in the book was shocking not for it's conclusion, but because of how utterly familiar it all felt. At times the only thing keeping me from throwing the book across the room was McKinley's achingly beautiful writing about the relationship between dogs and humans.

While this book is not for the faint of heart, I would be remiss if I didn't remind you that the root of the word courageous is coeur : heart. And that the heart is a muscle; it needs exercise.

“A fierce and beautiful story of rage and compassion, betrayal and loyalty, damage and love...A fairy tale for adults, one you'll never forget.”—Alice Hoffman, New York Times bestselling author of The Rules of Magic

The only daughter of a beloved king and queen, Princess Lissar has grown up in the shadow of her parent’s infinite adoration for each other—an infatuation so great that it could only be broken by the queen’s unexpected passing. As Lissar reaches womanhood, it becomes clear to everyone in the kingdom that she has inherited her late mother’s breathtaking beauty. But on the eve of her seventeenth birthday, Lissar's exquisite looks become a curse...

Betrayed and abused, Lissar is forced to flee her home to escape her father's madness. With her loyal dog Ash at her side, Lissar finds refuge in the mountains where she has the chance to heal and start anew. And as she unlocks a door to a world of magic, Lissar finds the key to her survival and begins an adventure beyond her wildest dreams.

Robin McKinley has won various awards and citations for her writing, including the Newbery Medal for The Hero and the Crown and a Newbery Honor for The Blue Sword. Her other books include Sunshine; the New York Times bestseller Spindle's End; two novel-length retellings of the fairy tale Beauty and the Beast, Beauty and Rose Daughter; and a retelling of the Robin Hood legend, The Outlaws of Sherwood. She lives with her husband, the English writer Peter Dickinson.

“A fierce and beautiful story of rage and compassion, betrayal and loyalty, damage and love.” –Alice Hoffman

“An enormously powerful novel…dreamlike, urgent, inexplicable…Robin McKinley has created a world where nightmare and hope exist side by side.” –Patricia A. McKillip

“I did so much enjoy Robin McKinley’s Deerskin…I respect her writing and reread her constantly, finding new perceptions each time.” –Anne McCaffrey

“Deerskin is a subversive fairytale with an element of myth, but most of all it is a psychological novel of great depth and power, using fantasy in the service of truth.” –Locus

“McKinley’s writing is amazing, dreamlike, gut-wrenching, and heartwarming…A very uplifting story of triumph and love.” –Under the Covers