The Secret of Magic (Paperback) 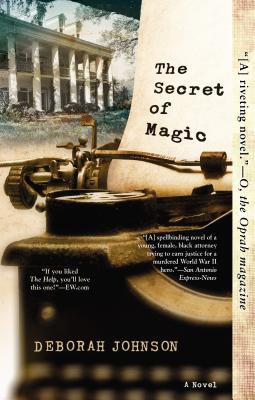 By Deborah Johnson
$16.00
Unavailable at this time.

Stepping into the 1946 hotbed of Revere, Mississippi, New York NAACP lawyer, Regina, investigates the murder of a black World War II hero, Joe Howard Wilson, who courageously survived everything but his hometown. After a grand jury deems his death "an unfortunate accident," eccentric author of The Secret of Magic, M.P. Calhoun, calls upon Thurgood Marshall for support to honor her lifelong employee and friend, Joe's father. Stories swirl from Calhoun's book, more truth than fiction, woven in and out of the lives of beloved, tragic characters!

Winner of the Harper Lee Prize for Legal Fiction

In a novel that “brings authentic history to light,”* a young female attorney from New York City attempts the impossible in 1946: attaining justice for a black man in the Deep South.

Regina Robichard works for Thurgood Marshall, who receives an unusual letter asking the NAACP to investigate the murder of a returning black war hero. It is signed by M. P. Calhoun, the most reclusive author in the country.

As a child, Regina was captivated by Calhoun’s The Secret of Magic, a novel in which white and black children played together in a magical forest. The book was a sensation, featured on the cover of Time magazine, and banned more than any other book in the South. And then M.P. Calhoun disappeared.

With Thurgood’s permission, Regina heads down to Mississippi to find Calhoun and investigate the case. But as she navigates the muddy waters of racism, relationships, and her own tragic past, she finds that nothing in the South is as it seems.

Named one of four titles on the shortlist for this year’s Ernest J. Gaines Award for Literary Excellence, awarded by the Baton Rouge Area Foundation

Deborah Johnson is the author of The Secret of Magic and The Air Between Us, which received the Mississippi Library Association Award for Fiction.

Praise for The Secret of Magic

"There are a million metaphors I could use to describe Deborah Johnson's writing in The Secret of Magic—but all of them are inadequate in conveying the ebb and flow of her phrasing or the care in crafting her characters.... If you liked The Help, you'll love this one! ... [T]he cadence of Johnson's writing is an absolute joy.... I can't think of any other recent book in which I have so enjoyed an author's actual stringing-together-of-words." —EW.com

“I found this story about race, The South, our country, part history, part mystery—never disappointing. Like The South she tragically portrays, The Secret of Magic is a layered tale of the best and worst of our history, beautifully wrought by a master storyteller.”—Robert Hicks, New York Times bestselling author of Widow of the South

“The secret (and magic) in The Secret of Magic is in Deborah Johnson’s powerful writing, creating character and story that will linger long after the reading.”—Terry Kay, author of To Dance with the White Dog

“I am mightily impressed with her work. Johnson’s story brings authentic history to light, yet suggests a seed of reconciliation. Fantastic!”—Augusta Trobaugh, author of Sophie and the Rising Sun

“You can almost hear the rustle of Spanish moss and the clink of ice cubes in glasses of sweet tea in Johnson’s novel, which captures the duality of the Jim Crow South…As Regina navigates Revere with both horror and wonder, Johnson interweaves her story with a novel by a local matriarch, steeping the reader in town mythology…[A] rich portrayal of Revere and its inhabitants.”—Entertainment Weekly (A-)