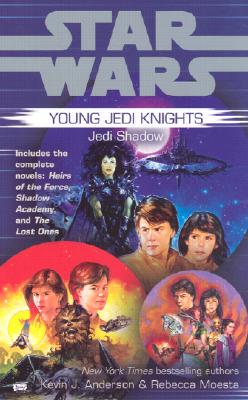 Includes the complete novels: Heirs of the Force, Shadow Academy, and The Lost Ones HEIRS OF THE FORCE In the jungle outside the academy, the twins make a startling discovery--the remains of a crashed TIE fighter. The original pilot, an Imperial trooper, has been living wild in the jungles since his crash. Waiting for a chance to return to duty... SHADOW ACADEMY Thanks to the Dark Jedi Brakiss--Luke Skywalker's former student--the dark side of the Force has a new training ground...the Shadow Academy... THE LOST ONES Jacen and Jaina could lose an old and dear friend. Zekk is wild and free in the underground mazes of Coruscant--and a perfect candidate for the Shadow Academy...

Kevin J. Anderson and his wife, Rebecca Moesta, have been involved in many Star Wars® projects. Together, they are writing the eleven volumes of the Young Jedi Knights saga for young adults, as well as creating the Junior Jedi Knights series for younger readers. Kevin J. Anderson is also the author of the Star Wars®: Jedi Academy trilogy, the Star Wars® novel Darksaber, and the comic series The Sith War for Dark Horse comics and the science fiction novel Blindfold. He has edited several Star Wars® anthologies, including Tales From the Mos Eisley Cantina (July 1995), in which Rebecca Moesta has a story. Rebecca Moesta will also be writing three books in the Junior Jedi Knights series.