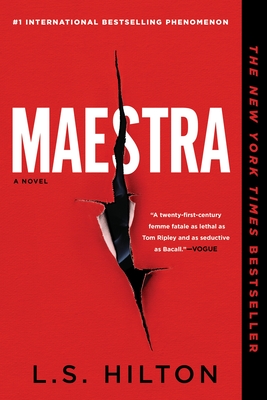 Listen. It's flashy. It's a little trashy. It's so gratuitous (and occasionally heartless) you might get a little rashy. As someone who grew up obsessed with the silly lavishness of Dynasty and Lace, though, these are all selling points. It's getting hot outside and a little decadence never killed anyone (summer isn't exactly the right time for The Decalogue, you know?). The character's slow, tawdry, expensive descent into psychopathy had me blushing, balking and laughing out loud. Maybe not Hilton's intention, but the low-throttle maniac she has created here wouldn't hold it against me.

“Get ready to tear through this hedonistic and refreshingly sex-positive thriller that hits all the right notes. Hilton sets her amoral heroine, Judith, amidst the shallow elegance of the European art world. While Judith is deeply enamored with the lifestyles of the rich and famous, she is also a razor-sharp critic of bad taste and human softness, sniffing out and exploiting male weakness with gusto. She is utterly void of empathy, yet oddly sympathetic. I'll be recommending this novel to everyone I know with a strong constitution and an appreciation for intensity!”
— Seija Emerson (W), University Book Store, Seattle, WA

“One of this year’s most talked about novels.” —The Washington Post

“A twenty-first-century femme fatale as lethal as Tom Ripley and as seductive as Bacall.” —Vogue

A put-upon assistant at a prestigious London art house, Judith Rashleigh is well-educated, well-groomed, and impeccably behaved—keeping the darker desires she indulges on nights off as her own little secret. But when Judith uncovers a dangerous heist, her life is shattered and she’s forced to run. Armed with just her wits and a talent for self-invention, she makes her way from the French Riviera to Geneva, Rome, and the nightclubs of Paris, determined to take back what is rightfully hers.

The beginning of a darkly irresistible trilogy, Maestra follows the rise of Judith, a woman whose vulnerability and ruthlessness have left readers worldwide begging to know: where do you go when you've gone too far?

L. S. Hilton is the author of the New York Times and internally bestselling novel Maestra and Domina. She grew up in England and has lived in Key West, New York City, Paris, and Milan. After graduating from Oxford, she studied art history in Paris and Florence. Hilton has worked as a journalist, art critic, and broadcaster, and is presently based in London.

“A radical heroine. She deploys a uniquely female arsenal...weaponizing femininity...It’s hard not to feel vicariously empowered by a woman unapologetically in pursuit. Let’s call her the Sheryl Sandberg of sociopaths, leaning in to the hilt.”—O, The Oprah Magazine

“One of this year’s most talked-about novels. . . . More mayhem, more art—and certainly more sex—lie ahead for insatiable Judith.”—The Washington Post

“[A] shopathon travelogue thriller that has billionaires, art world scheming, and a sociopathic heroine who can unfasten belt buckles with her teeth.”—The New York Times

“An unpredictable London auction-house assistant turned high-class escort slips effortlessly into the world of the glamorous and wealthy, crossing international borders and leaving destruction in her wake.”—The Wall Street Journal

“The European art world mixes with an underground world (hint: sex parties). This thriller is like The Talented Mr. Ripley meets The Girl with the Dragon Tattoo. Warning: it’s VNSFW. That V is for very.” —The Skimm

“[J]ubilantly mordant...A twenty-first-century femme fatale as lethal as Tom Ripley and as seductive as Bacall.” -Vogue

“Ever since Gillian Flynn dominated the book club circuit (and the big screen) with her psychological thriller Gone Girl, everyone's been waiting for the next mystery to sink their teeth into. [Maestra] is it..”—InStyle

“A taut, meaty thriller . . . Judith Rashleigh’s single-minded and self-centered quest for wealth and acceptance could well be the most compelling since Patrick Bateman’s.”—Chicago Review of Books

“As readable as any crime thriller, but also clearly belongs in the literary tradition of Moll Flanders and Vanity Fair.”—Sunday Times (UK)

“Meet Judith, an art-house assistant who’ll make you root for the bad girl once you really get to know her.”—Marie Claire

“Thank the book gods that L. S. Hilton’s Maestra is only the first installment in a series.”—Redbook

“Hurry up and read this R-rated psychological thriller before it hits the big screen—it’s already been optioned by Columbia Pictures. Think 50 Shades of Grey meets The Talented Mr. Ripley.”—Allure.com

“[A] deliciously Highsmithian thriller...As Judith assumes and sheds identities as effortlessly as her Louboutins during a twisty series of increasingly treacherous escapades, Hilton artfully conjures a glossy world where just about everything—and everyone—has its price.”—Publishers Weekly (starred review)